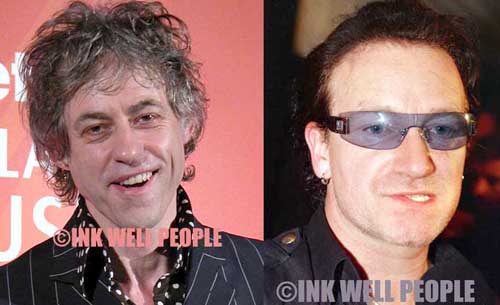 By Andrea Clarke
Photos By Fabrizio Belluschi
IRISH rock duo Bono and Bob Geldof have been named among the most respectable partnerships in the world.
The pair were runners up in a list of business and charity leaders, praised for their activism and contributions to fund-raising.
The U2 frontman and the singer/songwriter were beaten to the top spot by billionaires Bill and Melinda Gates.
The survey, conducted by the Leaders in London International Leadership Summit 2007, asked participants to name the most respected partnerships in five categories.
Sir Mick Jagger and Keith Richards were named the number one pairing in the entertainment world, while in politics, the former United States president Bill Clinton and his wife, current Democratic presidential candidate, Hillary, were named the most respected couple.