Gunther von Hagensâ€™ BODY WORLDS: the original exhibition of real human bodies, will return to the UK on 22 February 2008 to 29 June, with its latest and most technically refined collection. 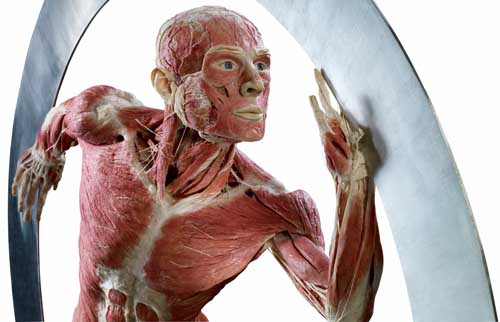 BODY WORLDS 4, which features anatomist Gunther von Hagensâ€™ groundbreaking science of Plastination, will have its world premiere at the Museum of Science and Industry (MOSI), Manchester. Tickets are now on sale.

The UK debut marks the return of the exhibitions to Europe, after a three-year tour through North Americaâ€™s science museums, to critical and public acclaim.

BODY WORLDS is the most highly attended touring exhibition in the world, attracting 25 million visitors. When the exhibition ran in London between 2002 – 2003, it drew more than 800,000 visitors.

BODY WORLDS 4 is the culmination of the German scientist and physicianâ€™s 30 year career in anatomy. It has more than 200 authentic specimens including organs and about 20 spectacular whole body specimens, which demonstrate the very latest technical achievements and refinements in the science of Plastination and anatomical specimen preservation. Many of the exhibits demonstrate the effects on the body of widespread health problems in the UK such as obesity, smoking and heart problems.

Dr von Hagens said: â€œThe latest BODY WORLDS, which I have worked on for more than three years, captures the evolution, refinement, and elegance of Plastination to its outer limitsâ€.

Tony Hill, Acting Director of MOSI said: â€œIâ€™m delighted that Gunther von Hagens has chosen to premier the latest BODY WORLDS exhibition at MOSI in Manchester. This is a unique insight into the beauty and complexity of the human body, and a chance to experience first hand the impact of poor health and lifestyle choices on our bodies.

â€œBODY WORLDS is a fantastic way to encourage people to change their lifestyles as it clearly demonstrates to people the effects of health problems such as obesity and heart disease, which are widespread in Britain, particularly in large cities such as Manchester. The exhibitionâ€™s educational benefits build on current UK – wide government campaigns to tackle these conditions. The Manchester exhibition is the first time such a complex range of plastinates has been shown in Europe, and we expect BODY WORLDS 4 to be an extremely popular exhibition, so reserve your tickets now!â€

Dr. von Hagens, a former researcher at the University of Heidelbergâ€™s Anatomy and Pathology Department, invented Plastination in 1977, in an effort to improve the education of medical students. The striking whole-body plastinates in BODY WORLDS 4 come from people who have, in their lifetime, donated their bodies for Plastination, specifically to educate future generations about health. The plastinates allow viewers to see inside the staggeringly complex and completely interconnected network of muscles, tendons and blood vessels that make up our bodies. More than 8,000 donors including 103 Britains have bequeathed their bodies to von Hagensâ€™ Institute for Plastination in Heidelberg, Germany.

The exhibition in Manchester will feature a rolling programme of lectures, workshops and school classroom activities, which will explore the issues surrounding BODY WORLDS, such as healthy living, anatomy, and the ethics of Plastination.