He’s also the youngest member of the Memphis, TN-based Blues Foundation’s Board of Directors, and is spokesperson for their respected Blues In The Schools program. He visits Belfast’s Spring & Airbrake on Wednesday 9th July. 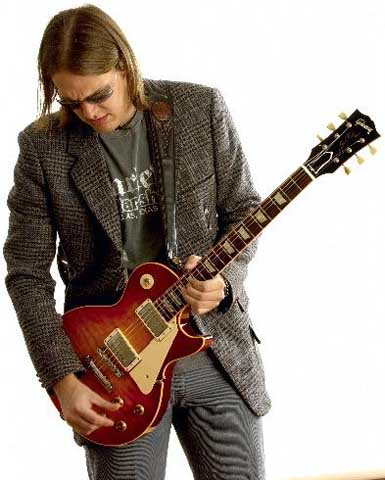 Bonamassa’s third for Provogue Records in Europe (excluding the 4 backcatalogue releases and 1 DVD), the disc re-teams him with producer Kevin Shirley (Joe Satriani, Black Crowes, Aerosmith, Led Zeppelin), who produced 2006’s You & Me, which debuted at #1 on the US Billboard’s Blues chart in June of last year, and was voted the Best Blues Album of 06 in Classic Rock, UK and reached #54 in the Dutch Album Charts.

“Sloe Gin is different than anything I’ve ever done before. I know we bettered You & Me, said Joe during a quick break in the non-stop touring that continues in Europe and the U.S. throughout 07. The songs are more refined, and I was concentrating on them as a whole rather than only thinking about a 50-bar guitar solo. Also, singing is a bigger part of it for me than ever before, and it’s awesome to have that space “ to connect with fans on a musical and lyrical level.

Bonamassa attributes much of the disc’s power to his continued collaboration with Kevin Shirley“ Its unbelievable, he takes my vision, augments it, and brings it further than I ever would have thought to. Joe specifically cites his influence on the title track â€œSloe Gin, a slamming, raw blues-rock opus clocking in at over eight minutes. I never would have found that one on my own, says Joe, œor gone where Kevin went with it. I really owe that whole sound for me to him.

“Shirley unearthed the rare song, written by Bob Ezrin and Michael Kamen, from Tim Curry’s little-known 1978 solo debut LP, but Bonamassa inhabits its rough edges and melancholy force vocally and instrumentally as if it was written just for him. Joe’s live performances of Sloe Gin at shows are currently drawing major fan chatter and Internet buzz. A few bars into it, he says, people are singing along. It’s going to be the biggest song we’ve ever had.

“Other tracks from Sloe Gin already making their way into Bonamassa’s concerts include the original song Another Kind Of Love, the Chris Whitley-penned Ball Peen Hammer, and Joe’s adaptation of the Ten Years After classic, One Of These Days. Album highlights also include the originals India, Dirt In My Pocket and Around The Bend, plus Bonamassa’s smokin versions of Paul Rodgers Seagull,the John Martin classic blues nugget Jelly Roll and Charles Browns Black Night.

Sloe Gin effortlessly ranges through heavy blues and acoustic numbers alike, a textured flow that Bonamassa says was in part inspired by Rod Stewart’s legendary 1969 debut solo LP. In the liner notes, Joe adds, sequenced the album as a throwback to the Side A/Side B set-up of vinyl records listening to an album as a whole is a lost pastime. I wanted to bring that experience back around.
jbonamassa.com
myspace.com/jbonamassa
JOE BONAMASSA
WEDNESDAY 9th JULY 2008
SPRING & AIRBRAKE
Doors 8:30pm Tickets: £17.50
Tickets on sale from Katy Daly’s, Zavvi & all usual Ticketmaster outlets. Credit card bookings & info: 0870 2434455 or book online at geturticket.com /ticketmaster.ie