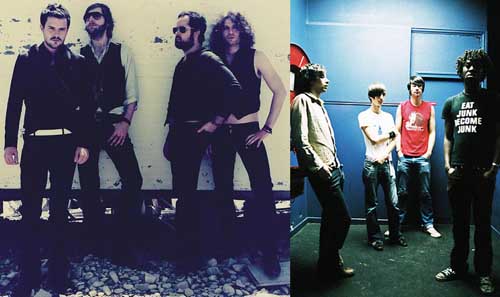 The Killers who will perform at Marlay Park Dublin on Thursday 21st August 2008 (subject to licence) will be joined by very special guests Bloc Party with Louis XIV also joining the line up.

The Killers â€“ Brandon Flowers on vocals and keyboards, guitarist David Keuning, bassist Mark Stoermer, and drummer Ronnie Vannucci are no strangers to Ireland having performed at the RDS Dublin and Oxegen music festival to ecstatic sold-out crowds only last year. Marlay Park Concert goers can look forward to the band performing tracks from their award-winning albums Hot Fuss, Samâ€™s Town and Sawdust.

Bloc Party â€“ Make a welcome return to Ireland . Bloc Party have released two critically acclaimed albums, Silent Alarm, their 2005 debut, which NME later made their Album of the Year and Bloc Party’s second studio album, A Weekend in the City in 2007.

LOUIS XIV – This American rock band burst onto the music scene with a confident, rock-n-roll swagger and ferocious, DIY-ethic. True artists in every sense of the word, the band has, and always will, produce and engineer their music themselves. A self-released album and string of EPs led to a deal with Atlantic Records and their 2005 major label debut, The Best Little Secrets Are Kept. Critical acclaim and globe-trotting tours followed. In January 2008, the band released Slick Dogs and Ponies, an ambitious followup album that features strings on all eleven tracks.