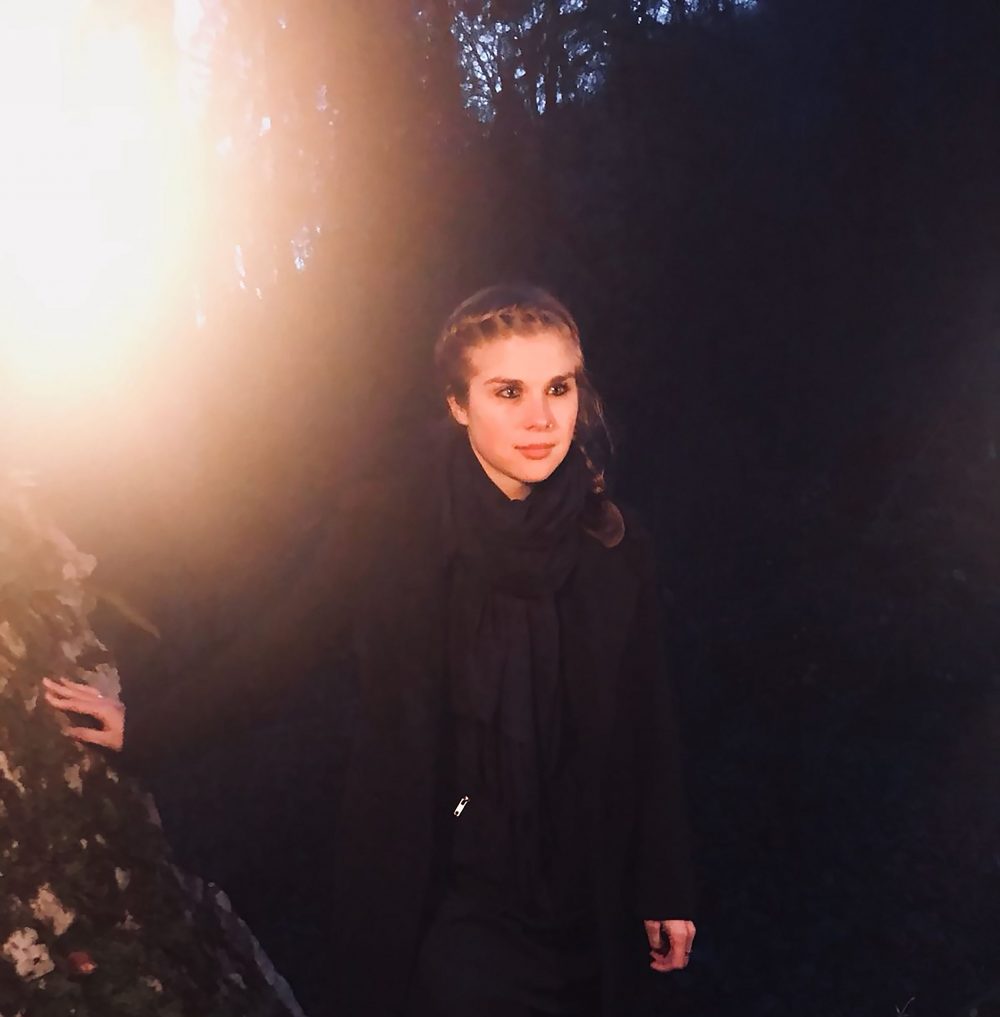 The latest single from Swiss project Bleu Roi is called The Darkest Hour. And rightfully so. It’s the type of music that begs for you to listen to it when the lights are off and you are left all by yourself (for some this might be something privileged). It demands your full, undivided attention – and once it gets it, then it really starts to weave its spell right into you. The word “epic” definitely comes to mind: cold and glacial; a crystalline and vast artefact – something awe-inspiring and mildly threatening.

Inspired by what we heard and saw (check the video below), we reached out to the band, and finally got the opportunity to sit down with lead vocalist Jennifer Jans for a short talk about her immense musical universe.

The Darkest Hour is available on all download and streaming platforms courtesy of PlusPlus Records. Bleu Roi are; Jennifer Jans (lead vocals), Imogen Jans (keys and backing vocals), Stefan Rüst (drums and video) and Axel Rüst (guitar aka the axe!).

This isn’t your first release, is it? Maybe you could tell us a bit about the history of Bleu Roi and where we are on that timeline?

No, it’s not! Bleu Roi started out as my solo-project in 2012, and the first release was an EP called ‘Treasures’ (in 2013), which I wrote and recorded in my bedroom in the summer of that year – after I spent three months in New York City (my other home) to write new songs, and get inspired by a different, and very vibrant environment. We also got to play a few shows in the US, which was an amazing experience for us. After this we spent quite some time looking for the right producer and studio to record our debut album, and were very lucky to have the possibility to go to the renowned Svenska Grammofonstudion in Gothenburg, Sweden. Many amazing artists have gone there to record. In late 2016 our album ‘Of Inner Cities’ was released, followed by several shows in Switzerland and Germany. We have been writing new songs ever since, and ‘Darkest Hour’ is our first new production – kind of a bridge to what is going to come next.

If not for the press release, I would’ve sworn that this is your solo project…

As mentioned before Bleu Roi started out as my solo-project. When it came to playing live-shows it was clear that I could not stand on stage on my own. So, for the first show, I asked my boyfriend to play guitar, his brother to play drums and my oldest sister to join in for a few pieces to play the piano. They all have a lot of experience with other groups. It was only then, that they became a very important part of the band and have been ever since. And yes, it’s truly wonderful to play in a band with your family!. I am still the one who writes the songs and has the overall vision, but they also became an essential part of the musical production.

Darkest Hour was recorded in Sweden, I’m curious what prompted you to leave your home-base to cut this record and how this effected the outcome?

Actually ‘Darkest Hour’ was recorded in Switzerland together with our Swedish producer, György Barocsai, with whom we recorded our album ‘Of Inner Cities’ (in Sweden back in 2016). But you are right, at the time it was a big step for us to go to Sweden for the production. The decision had to do with the fact that we wanted to get away from our everyday environment and have the possibility to concentrate on nothing, but our music, for a while. It’s a different kind of inspiration. We went there for a trial-session a few months before we went to record and immediately felt like we were talking the same musical language. Also, a lot of the bands we love have that „northern sound“ which we really wanted for our music. The Svenska Grammofonstudion in Gothenburg was founded by the former bass player of “Soundtracks of our Lives“ – a beautiful place with an incredibly warm environment, and any kind of instrument you could ever wish for. I think that made a big difference for the recording. Also, as a big lover of synthesizers, it was a real dream come true.

The song features a chorus of 20 voices, what is the story there? Or why did you decide for this particular approach to instrumentation? It’s stunning, but it also sounds like an expensive project, and maybe a bit complicated?

I wrote ‘Darkest Hour’ for our album release show in December of 2016 where we performed it for the first time together with my sister, Imogen’s, choir. She is a music teacher and a conductor of several choirs, and has a lot of experience with writing scores, and arrangements. She surprised me there with having a big part of the audience – all of our friends, family, and local musicians – join in with singing. It was one of the most amazing moments in my life, as the content of the song means so much to me. We decided it would be the perfect song to follow the album. So, we were able to bring in her choir to the studio session, which actually made it pretty uncomplicated, since they had already sung it before. We are very lucky to be in the midst of a very active music scene, so we can count on a lot of support. We feel very grateful for that.

In the press release it says that there won’t be another release from this project till 2019, is that right? Why such a long pause between the releases and how do you intend to fill this gap?

Actually we are going back to Gothenburg to record our new EP this coming July. The full EP will only be released in the spring of 2019, but there will be new music to hear earlier. The plan is to release individual songs before – so you will be hearing from us soon.

It’s almost like I don’t want to spoil the surprise, but I have to ask you, is this new EP that you are currently working on also this deep?

That’s not such an easy question to answer, as we might first have to philosophize on what “deep” means to us or on which level you can interpret this… But I think generally speaking, I am a person who thinks a lot about life and continuously reflects on herself. Music is a very important outlet for this, so I think there is automatically a certain depth to it. For the new EP the main focus deals with the duality of ‘Light’ and ‘Darkness’, so the new songs definitely will have several different levels.