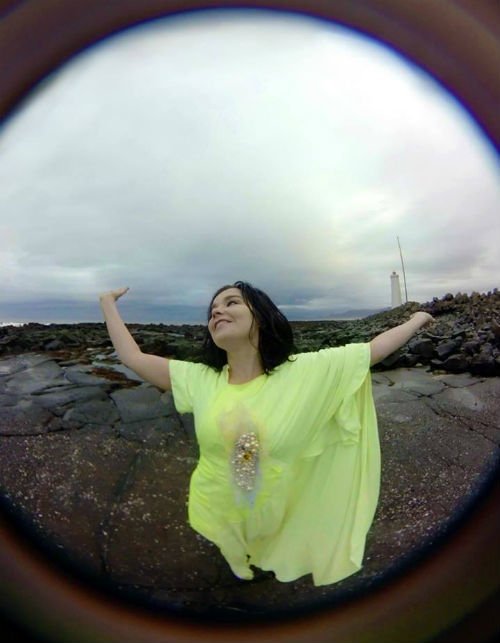 “I am proud to announce finally the release of combined digital/cd and vinyl of ‘Vulnicura’. It took us a while to gather all together into point after leak but here you are: I would like to thank all my team for their insane hardwork and be up for some tupsy turvy improv.

“I am also incredibly proud to offer a premier of stonemilker. With 360 3D sound mix for virtual reality headset.

This came about as a spontaneous fruit of mine and Andrew Huang´s collaboration. We had already done black lake, the “family” moving album cover and the black lake “book cover” trailer and then found us in Iceland one day with nothing to do and a 360 camera lying about .


She continues…”We discussed its potential for intimacy and Andrew then suggested we take it to the beach where the song was written. It immediately rang true for me as that location has a beautiful 360 panoramic view which matches the cyclical fugue like movement in the song. If the song has a shape it is sort of like a circle that just goes on forever.

I had recorded the strings with a clip on mike on each instrument. We have made a different mix where we have fanned this in an intimate circle around the listener.

So as you watch this in the virtual reality headset it will be as if you are on that beach and with the 30 players sitting in a circle tightly around you.

In celebration of the physical release we will premier this in the rough trade record shop. (I LOVE ROUGH TRADE saved my life so many times) and in ps1 you will be able to go and see it for next couple of months…hope you like it…gratitude.”

Andrew Huang explains: “We captured “Stonemilker” in November on the westernmost tip of Reykjavik, an island called Grótta on the Seltjarnarnes peninsula, which is the very site by the lighthouse where she wrote the song and recorded much of Vulnicura.

After arriving in Iceland with a variety of camera gear and open minds, and after my in-depth conversations with Bjork at her home about the circular nature of the song, we spontaneously decided to shoot a performance of “Stonemilker” on the beach where it was written, using the 360 VRSE.works camera with the intent of capturing an intimate performance for virtual reality in the round.

Grótta was a challenging location, as our only access to the island was a rocky narrow beach frequently covered by a swift moving tide easily stranding anyone who didn’t keep watch of the clock. We only had time to plan the shoot the night before, and only 2 hours of filming due to the tide, and captured the performance in just a few takes.

Because of the all-seeing nature of this camera, my whole crew and I ducked behind boulders, leaving Bjork alone with the camera, not knowing what we would be ultimately capturing. All I remember is staring at the pearlescent purple seashells beneath my feet throughout the takes listening to her strings reverberating against the wet tidepool rocks, popping my head up occasionally to steal glances of Bjork in her duet with the camera.

The spontaneity of the experience contrasted the months of planning and designing “Black Lake,” shot in Iceland only a few months before in August. My experience with Bjork that summer involved her wearing a fitted sculptural black dress, pounding her chest in frigid temperatures, reliving her separation on camera while kneeling in a jagged ravine carved away by glaciers.

The woman we found in November was much different: her home was adorned with lilac candles, the air was moist and thick with neon yellow garments hanging and the tables covered in creamy lilac latex. There was a feeling of soft, translucent skinlike textures everywhere, evoking a sense of healing, molting and nakedness. This was the new Bjork we captured in “Stonemilker.”

BJÖRK’S VULNICURA IS OUT NOW ON VINYL AND CD