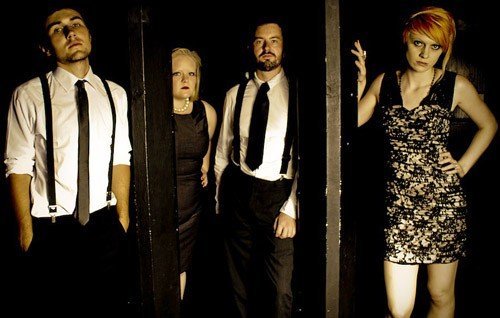 Check out our Q&A with Brighton-based Birdeatsbaby. Their album ‘Feast of Hammers’ is out today 20th Feb 2012.

Birdeatsbaby are beautiful and sinister, fragile yet aggressive, light surrounded by shadow. A thrilling proposition, fabulous freakery personified…
Some may be forgiven in thinking that your song “Incitatus” is very similar to Marilyn Manson’s “This is Halloween” from Tim Burton’s “Nightmare Before Christmas”.

Have you intended on this general opinion or is it just coincidental?

I guess we never thought about it like that but now you mention it I do know that version, and it has got similarities… Tim Burton and Marilyn Manson as accidental influences can only be a good thing! And that film is amazing.

Where did you get the influence for your “eerie” music videos?

We’re all quite into horror flicks, especially old timey ones from Hitchcock, and Garry loves his classic zombie films so I guess that’s part of it.

Also, the music we write is a little eerie so we try to make it match the sound. Mish also has a very over-active imagination.
Did you have any particular influences you wanted to use in mind when it came to recording “Incitatus” and shooting the video?

As soon as we’d finished the song we already had an idea of exactly what we wanted to music video to look like.

Keeping it in theme with our Hitchcock-esque horror movies we though we’d like to add an ‘asylum’ element… the song itself is quite schizophrenic and mental too so it worked pretty well!

We wanted bits of it to look like Gothika, the film with Halle Berry in the mental asylum, that was shot so beautifully and looked very eerie. Some people have told us it’s a bit like the Slender Man. 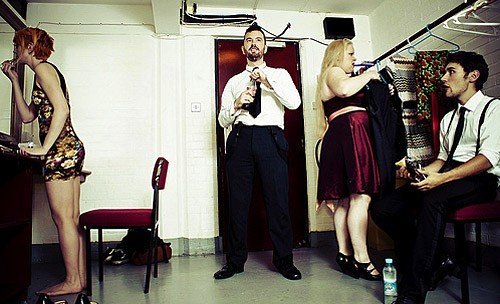 How did you come up with the name “Birdeatsbaby” for the band?

We always get asked this… there isn’t really a very good answer! We just plucked three words and put them together and
thought: that’s morbid, and weird, and memorable.

That’ll do! I think it suits us now and the name provides a lot of interesting imagery for us to work with! People don’t easily forget it either!

You’ve worked with Jason Rubal, producer of The Cure and Dresden Dolls. What was that like?

Probably the highlight of our band career so far! It was incredible, and very, very fun. Jason looked after us very well,
and completely got behind our sound and ideas and helped make them sound better than we could have ever asked.

We hope to return to him as soon as possible for album number 3!

What sort of reputation do you hope to build for yourself?

We already have quite a drunken repuation…perhaps we should try to sober up! No seriously though, we’d like to be
known for being different, for having our own genre, for creating memorable and epic songs, and for not conforming to the norm.

Who do you inspire to be like in today’s music scene?

Muse. Clearly we need to get a synth and a ridiculous amount of pedals to do this though!

They’ve built their ridiculously huge following on writing consistently good songs. If we could build up that kind of following even a little bit we’d be a proud band.

How did the four of you meet?

Keely and Mish caught the same bus back from university everyday. We used to sit together and chat about music…and
make plans about creating an awesome and original band. We later recruited Garry on another music course and Charlie we
found in the magical land of gumtree!

Have you any exciting future plans in the pipeline?

YES! We go on tour to America, Europe and UK this summer during June/July/August so keep an eye out for dates. After that
we’re going to sleep for a week, then begin to write the follow up record.

Mishkin also has a solo record coming out in May to keep you going till the next one.

Do you plan to keep your “eerie gothic” look and sound in your music, or do you want to develop something that will appeal to more mainstream audiences?

We have actually toned down a little bit since the early days believe it or not! However, I do think our music will change and develop, hopefully becoming more accessible to more people – we’re wary of becoming too niche.

It really depends on what songs we write next – we don’t really plan the creativity it just happens and we go with it no matter what.

I think our songs will always have an element of eeriness though, Mish is incapable of writing something happy.

Who is your biggest music influence?

For Mish, Nick Cave, Queen and Muse as well as a huge range of classical stuff and 70s punk.
For Keely, Motown, Classical and Jimi Hendrix.
For Garry, Pink Floyd, Heavy Metal, Jazz and Funk.
For Charlie, hardcore and pop-punk, Tiger’s Jaw, Brand New
and The Get Up Kids.

…as you can see this is why we sound so odd.

What made you go down this particular route?

I don’t think we really chose purposefully to go down any particular route… We just started with a few chords on the
piano, we wanted it to be fast and aggressive but not with guitars, instead using orchestral instruments… and that’s how
we wrote ‘I Always Hang Myself’ and ‘The Trouble’.

It was a happy accident! And hopefully one that will see us pioneering a new genre!
Feast of Hammers
Release date: 20th February
Cat No: DRE004
Label: Dead Round Eyes Records
birdeatsbaby.co.uk