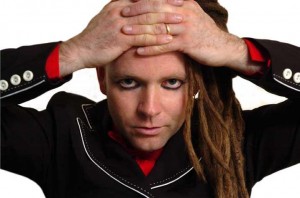 Duke Special will perform at his own biggest event to date on Saturday 29 August at Custom House Square, Belfast. It will be the Dukeâ€™s only Northern Ireland headlining show of the year, and heâ€™s just announced that he has put together a seven piece band specially for the occasion.

Dukebox will also feature friends and special guests from the world of music and beyond in a strong supporting cast, with a programme of entertainment, performance and more from early afternoon in and around the city centre venue.

“It’s hugely exciting to perform my largest headline show to date in my hometown. Having so many fantastic artists in Belfast for the first Dukebox is an honour.It will be a brilliant day” said Duke Special

â€œIn the course of touring and recording in recent years I have had the pleasure of meeting many fine people and talents. Iâ€™m delighted to be presenting so many of those I admire at Dukebox – some well known, some less in the public eye, but all worth experiencingâ€ he continued.

An accomplished performer, harking back to the pre-rock â€™n’ roll era, Duke Special has sold out shows across Ireland, the UK and Europe. The release of Songs From The Deep Forest brought him to international attention, and last yearâ€™s I Never Thought This Day Would Come cemented his reputation.

The Magic Numbers shot to fame in 2004/2005, a word-of-mouth phenomenon whose affable live shows won them an immediate following. Their music is a harmonious blend of soft country pop with Fifties and Sixties inflections. The band comprises two brother / sister pairings: Romeo and Michelle Stodart who were born in Trinadad and raised in New York, and the London born Sean and Angela Gannon. They are currently working on their third album, the follow up The Magic Numbers and Those The Brokes which between them spawned six top 40 singles in the UK. They have recorded with Duke Special, contributing backing vocals to his Our Love Goes Deeper Than This single.
The Magic Numbers – Forever Lost

Bell X1 are no strangers to Belfast. They are one of Irelandâ€™s most successful rock bands, with their two most recent albums â€“ Flock and Blue Lights on the Runway topping the charts. They come to Dukebox between a guest spot with U2 at Croke Park and a main stage spot at Electric Picnic. In recent years Bell X1 have gained significant success in the United States, where they have achieved critical acclaim and strong album sales and made several tv appearances with the likes of David Letterman, as well as having their music used on popular shows such as The O.C. and Grey’s Anatomy.

Fronted and created by former An Emotional Fish singer Ger Whelan, Jerry Fish & The Mudbug Club use brass instruments and a jazzy style to create something truly unique. Whelan notably calls it â€œindie lounge lizard schmooze, mariachi swampadelicaâ€. Jerry Fishâ€™s debut album album Be Yourself in 2002, which included guests such as Mundy and Damien Rice, won a Meteor Irish Music Award for Best Country/Roots Artist and was described as “genius” by critics. The follow up The Beautiful Untrue has been recently released and builds imaginatively on his debut

David Kitt is an award winning singer, musician, and producer. His debut release, Small Moments and follow up The Big Romance were sophisticated lo-fi efforts. Third album, Square 1, went straight to number one in Ireland . But this short dalliance with a major label did not work out, and Kitt has since continued with self releases and recordings for indie labels, a scenario which he insists he is happy with and which allows him musical space and the ability to engage more directly with his loyal international fanbase. Most recent outing The Nightsaver is as natural sounding an album as youâ€™re likely to hear in 2009.

Panama Kings deliver their tremendously twisted songs with gusto, and have made an impressive impact on the NI music scene in double quick time. Onstage they have swagger and edge, coming across like an outfit who mean business. On record the same spirit is evident on debut single Young Blood.

Other artists announced for Dukebox are: David Ford, The Voluntary Butler Scheme , Thomas Truax , One Day International and Dan Michaelson and the Coastguards.

Dukebox is a one day event within Belsonic â€™09, Northern irelandâ€™s biggest summer music event, taking place over the August bank holiday weekend. Dizzee Rascal and Vampire Weekend headline on Thursday 27th, whilst 2manydjs and deadmau5 top the bill on Friday 28th. The central location provides for easy access to parking, transport links, shops, bars and restaurants. Belsonic â€™09 will provide the very best in drinks and food and other high quality services in the concert arena. More info at www.belsonic.com

Gates open for Dukebox at Belsonic on Saturday 29 August at 3pm
More info at the special event website www.dukebox.tv
Tickets are Â£29.00 (plus booking fee) and are available from www.belsonic.com , the Stiff Kitten bar & all Ticketmaster outlets.
Special tickets for accompanied under 16â€™s to Dukebox are also available at Â£19.00 (plus booking fee)
VIP tickets for this date are now sold out.