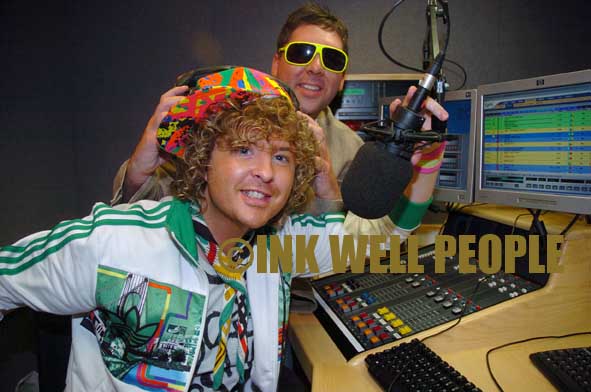 EXCLUSIVE
By Tina Calder
Photo by Fabrizio Belluschi
WACKY Big Brother star Seany Oâ€™Kane was back home.
On Friday Seany arrived at Belfastâ€™s International Airport to be mobbed for over 40 minutes while being filmed for a Channel 4 fly on the wall documentary.
Pictured here Seany, 25, arrived at CityBeat Radio in Belfast for an exclusive interview with station presenter Robin Elliott.
Speaking at the station about his return home Seany said: â€œOh my God it was crazy I got mobbed at the airport. They were getting out the mobile phones and a hen party almost molested me it was mad, Iâ€™ve just been talking to Chanelle and Charley and the paparazzi are after them everywhere whereas itâ€™s the public that seem to love me â€“ Iâ€™d rather have that because it feels like I did exactly what I wanted to do on the show and that was to make people happy.
â€œI wasnâ€™t worried about coming home because I knew people would know I was being myself and I received a great reception.â€
On Saturday Seany closed Gay Pride in Derry City and appeared at gay nightclub Pepes in the city. â€œIt was such a brilliant gigâ€ said Seany.
â€œI canâ€™t believe I closed Gay Pride and presented the Man Of The Year award. Itâ€™s good to be embraced and it was always more important for me to be embraced by Derry.
â€œI never thought in a million years that I would be closing the Gay Pride parade in my home city.
â€œI certainly couldnâ€™t have dreamed it a few years ago because I hadnâ€™t even come out myself.
â€œItâ€™s about time we moved on to love one another regardless of sexual orientation, colour or religion – itâ€™s a step forward not just for Derry but for the whole country.â€
And colourful Seany added that despite getting kicked out of the Big Brother house earlier than he expected that he enjoyed his time there and still believes heâ€™s made an amazing achievement.
He said: â€œThe local paper has supported me all the way and Iâ€™m really pleased about that.
â€œItâ€™s a big achievement only three people from NI have gone into the house in eight years and Iâ€™m so proud Iâ€™m one of them â€“ it can be done.â€
During his whirlwind first day back home he even had time to think of his fans.
â€œThank you so much to everyone in Ireland and the north I just want to thank everybody from the bottom of my heart and give them all Seany love â€“ I will be around for as long as they want me toâ€ he said.
Â©INK WELL PEOPLE