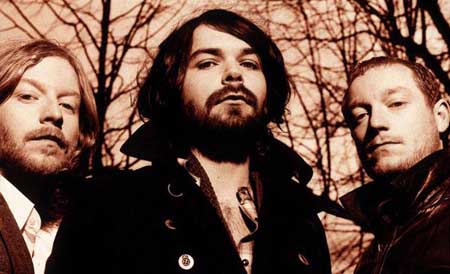 Drive for an hour so outside Glasgow, you’ll find an unassuming little town called Ayr. It’s a pretty but unremarkable place; certainly not the sort of place you expect revolutions to start. But then, if we know anything about revolutions, it’s that they never happen quite when or where you expect.

You’ll have heard of biffy clyro before of course. About how Simon Neil and schoolfriend twins James and Ben Johnston formed their first band as young teenagers at school in the nearby town of Kilmarnock in 1995 over a shared love of experimental rock and hardcore. You’ll know something of how they earned an army of rabidly devotional fans – christened Team Biffy â€“ who followed them across the country and beyond, their hearts swelling with the searing emotion; their minds expanded by the threesomeâ€™s inventive rock that somehow managed to hit them in the gut at the same time.

And you’ll probably know about their three albums; ‘Blackened Sky’, ‘The Vertigo Of Bliss’ and ‘Infinity Land’, which slowly – and on their own terms – saw them notch up higher and higher chart positions. What you might not know is that in the two-and-a-half years since ‘Infinity Land’, they’ve been hard at work making what could just be the next truly, historically, important rock record to come out of the British Isles. It’s called ‘Puzzle’ and it’s coming your way.

Of course, Simon Neil, James and Ben never actually stopped. During biffy’s brief hiatus, all three have been kept bust with extra-curricular underground work. And the experience of making some of the most ‘out-there’ music of their careers only fuelled their desire that when they did come back, it would be their biggest, best â€“ but also strangest â€“ yet.

To help them make â€˜Puzzleâ€™, they chose Canadian producer Garth Richardson, inspired by his work with Rage Against The Machine and Kerbdog, and an innate sense of his “great vibe.” The venture saw them fly to Vancouver, then to Richardson’s stunning ranch studio in the forests of Gibson to record their masterwork. The collaboration bore exceptional fruit, but the band admit it took time â€“ after recording their previous three albums on a budget and at speed – to adapt to recording in the same way as their heroes.

Explains Simon: “For the first week we had to really slow down how we were doing things. Weâ€™re used to a hundred miles an hour, but we would have burnt out after a week. We needed a lot more patience about it, but the results are worth it. It took Garth a few days to realise how headstrong we were. We’re up for collaborating, but this is our record and we very much are doing what we want to do. It took him a few days to realise that we were going to reject some of his ideas as much as we would collaborate.”

From Vancouver, they decamped to New York to mix the album with Andy Wallace – who also handled ‘Nevermind’. Artwork, meanwhile, has been handled by Storm Thorgusson; the man behind Classic Rock records both old (Pink Floyd) and new (Muse).

From the apocalyptic opener ‘Living Is A Problem Because Everything Dies’, its clear that they have out-biffed the biff. 2001 A Space Odyssey by way of Wagner and Rage Against The Machine, it boasts a stunning baroque choral arrangement and strings by Hollywood arranger Graeme Revell (â€˜Sin Cityâ€™, â€˜The Crowâ€™, â€˜From Dusk Til Dawnâ€™). It’s a gigantic, ostentatious raising of their game. “We’ve always been very ambitious in the music we wanted to make,” says Simon. “It was never just about guitars bass and drums, even though we’re a three-piece. On our records we’ve always tried to use as much weird shit as possible.” ‘Puzzle’ has seen the band finally realise the sound in their heads, it also sees them anchor some of their most outlandish ideas (check the staggering ‘9/15ths’ for evidence that they’ve done anything but gone soft) with the sort of clear and crisp melodies that this three-headed powerhouse have been hinting at since the days of ‘Justboy’ and ’27’.

From soaring download single ‘semi-mental’ through to the bludgeoning punch of ‘Saturday Superhouse’ through the swollen intensity of the slow-burning ‘As Dust Dances’ to the glorious foot-stomping live favourite ‘Who’s Got A Match?’, ‘Puzzle’ packs an emotional punch with 24-carat choruses shot through with biffy’s trademark sideways approach to songwriting. The band admit that this new directness is the result of their searing five-year apprenticeship, working through their ideas and growing into a truly world-beating band. “We’d normally have maybe hidden moments like that before,” admits Simon.

“Maybe because the lyrics are a bit more personal this time, it felt as though the music should breathe a bit more. A song like ‘As Dust Dances’, we’d just kind of played it and were hypnotising ourselves by playing it; rather than trying to rock it up or anything it just felt right, the song’s hardly changed since you first heard it. We maybe wouldn’t have enjoyed playing that song five years ago, we’d have been so restless we wouldn’t have felt comfortable, but now we feel as though we can do that, and it works. Rather than trying to cram maybe 100 ideas into ten seconds, leaving them out it can sometimes make things better.”

‘Puzzle’ might be crammed with glorious rock songs designed to unite as many people as possible in the power of hard rock; but lyrically it’s been an altogether more traumatic process. Written in the shadow of the loss of Simonâ€™s mother, the album in many ways charts the process of Simon coming to terms with his feelings, and finding ways to move forward. And this is never more extreme than on the album’s devastating climax, ‘Machines’.

Says Simon: “It’s about how your mind works after having a serious grievance in your life; how at some points you’re really angry at yourself and everybody, at other points you just feel so sad and then you start imagining what death’s like and you suddenly get these vivid pictures of what you think they’re gonna be, and then doubting yourself and feeling better and then having a bit of hope. The albumâ€™s not in that order, but thatâ€™s whatâ€™s going on.â€

Above all, ‘Puzzle’ is the definitive statement – so far – from a band that believers have always known would take on the world one day. The band themselves are far too humble to take notice of the increasing number of voices calling them “the British Nirvana”. What it does do is set a watermark, and usher in a new age of British hard rock in the same way ‘Nevermind’ did all those years ago. We just want to make records that people can listen to in 20 years and think they’re good fucking records,â€ says Simon in conclusion. “We believe that if we follow what we want to do, which is very much our own take on things, that things will sound honest and real in 20 years time because there’s gonna be no schtick associated with it. We’re not dressed crazily, people stood up and took notice because we were making great music, and people had to stand up and pay attention, so I think if that can apply over three or four years, then I just hope that in 20 years it still applies. That’s what we want to do; we want to be an important band. And we think we are.”
myspace.com/biffyclyro