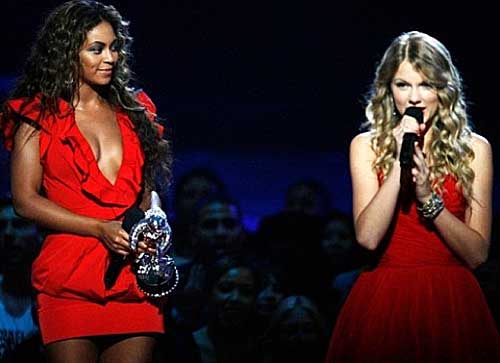 Black Eyed Peas and Kings Of Leon won three GRAMMYs each, the latter picking up the coveted Record Of The Year for “Use Somebody.” Picking up two GRAMMYs each were Eminem, banjo maestro BÃ©la Fleck, composer Michael Giacchino, Lady Gaga, Maxwell, Jason Mraz, and conductor Michael Tilson Thomas.

And in an evening of spirited, sometimes joyous performances, the broadcast’s more reflective moments might have been its most memorable. Following a star-studded tribute to Michael Jackson, the King of Pop’s children appeared, brave-faced and in armbands, to accept an award on his behalf. Later, Andrea Bocelli and Mary J. Blige sang a stirring duet of “Bridge Over Troubled Water” to raise funds for earthquake-devastated Haiti.

The 52nd GRAMMY Awards kicked off in grand fashion, literally, with Lady Gaga opening the festivities solo, emerging in a green-sequined bodysuit with angel wings, accelerating from a purr to a powerful roar for her No. 1 “Poker Face,” surrounded by a fleet of male dancers. Then, she faced a rhinestoned Sir Elton John â€” a 1970s fashion headline-maker himself â€” from opposite ends of a pair of conjoined pianos for a pair of songs: “Speechless” and “Your Song.”

If anyone in the audience wasn’t starstruck to begin with, they surely were by the time the pair passed the spotlight to first presenter Stephen Colbert. After cracking jokes â€” including one about a possible collaboration that would result in a group called the Pink-Eyed Green Peas â€” Colbert announced the winner for Song Of The Year, BeyoncÃ©’s “Single Ladies (Put A Ring On It).”

Jennifer Lopez then introduced the cast of “American Idiot,” a new Broadway show based on the Green Day hit album. The cast deployed big Broadway voices for a rendition of “21 Guns” before Green Day themselves thundered into the spotlight, reminding the world that it’s been a long time since the lovable but much less profound Dookie made the trio stars. 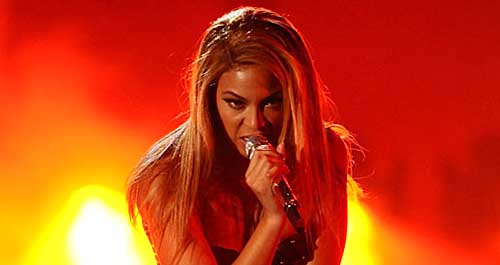 BeyoncÃ©, the field-leader with 10 GRAMMY nominations, took total command of the stage to open her performance. After parading down the aisle with a SWAT team of dancers, she launched fiercely into “If I Were A Boy,” at one point dropping to one knee in front of a crowd of fist-pumping fans, before segueing into a version of Alanis Morissette’s “You Oughta Know.” If she is known largely as a pop/R&B diva, that’s due to change as BeyoncÃ© proved she can not only belt, she can also rock.

Pink sauntered onto the stage solo to sing the gentle “Glitter In The Air.” Despite a quiet start, her trademark guts and grace were on full display as she slipped out of a white robe and into a swing that lifted her high above the stage, an acrobatic move that saw her suspended upside down and bathed in dripping water, helping add drama to a daring performance.

It was destined to be a good night for the Black Eyed Peas, nominated for six GRAMMYs. A fashionable Fergie, will.i.am, apl.de.ap, and Taboo lit into “Imma Be,” prancing and hip-shaking before bouncing in time alongside a team of dancing robots to their omnipresent smash “I Gotta Feeling.”

Lady Gaga wasn’t the only Lady sensation in attendance at the 52nd GRAMMY Awards. Lady Antebellum, who picked up a GRAMMY for Best Country Performance By A Duo Or Group With Vocals, sang the earnest “Need You Now,” the title track from their new album, with harmonic grace and country prettiness. Everything about the performance suggested long-term promise for the Nashville-based vocal trio.

The multi-talented Jamie Foxx threw the audience a curveball in posing as a cloaked opera singer, but in short order got us feeling loose alongside his generous collaborator T-Pain â€” who was disguised momentarily as a wig-wearing conductor â€” with the contagious hit “Blame It.” By performance end, Foxx was strutting, T-Pain’s dreads were shaking, and Slash joined the fun, adding some wailing guitar pyrotechnics.

Best New Artist winners the Zac Brown Band struck a patriotic chord by opening a country-laced medley with “America The Beautiful.” Leon Russell, resplendent at the piano with his long white beard, then joined in for “Dixie Lullaby.” Brown, the band’s huge-voiced singer, closed the medley with a feel-good acoustic blast of their No. 1 country hit “Chicken Fried.” He capped the performance with a fiery solo on his classical guitar, calling to mind a pair of dueling banjos. What was clear, though, was that few musicians would want to engage in a duel with this guitarist.

Swift and everyone’s favorite singing gypsy Stevie Nicks would at first glance seem to have little in common. Swift sings as if reading from her own diary, as she did on “Today Was A Fairytale,” and Nicks â€” with whirling sleeves and deep vocals â€” made her name on mystery. But when Nicks joined Swift for Fleetwood Mac’s classic “Rhiannon,” the two voices blended to reveal something at once sweet and unique. Nicks stuck around to lend a hand on “You Belong With Me,” adding vocal depth and shaking a tambourine.

Lionel Richie’s spirit-lifting introduction to the evening’s Michael Jackson tribute preceded a video clip, voiced by Jackson, recalling the tragedy of the King of Pop’s death as well as his commitment to multiple worthy causes. Celine Dion led an all-star, 3-D rendition of “Earth Song,” harmonizing with Usher before Carrie Underwood, Jennifer Hudson, and Smokey Robinson joined in. As the song built to its dramatic crescendo, each superstar took turns asking, on behalf of Mother Earth, the song’s sad refrain: “What about us?”

It was directly after the performance that Jackson’s children Prince and Paris took the stage to accept their father’s Lifetime Achievement Award. Eyes around the audience filled with tears as the children delivered touching speeches in honor of their father.

Following an acknowledgment of GRAMMY Salute To Industry Icons honoree Doug Morris, presenter Sheryl Crow explained the mystery performance to come. While Bon Jovi would take the stage to sing two predetermined songs, the audience â€” which had placed votes up until the band’s performance at CBS.com â€” picked the group’s No. 1 classic “Livin’ On A Prayer.” The ageless Jon Bon Jovi led his Jersey-bred bandmates on the group’s new anthem of hope, “We Weren’t Born To Follow.” Sugarland’s Jennifer Nettles joined Bon Jovi for their GRAMMY-winning song “Who Says You Can’t Go Home.” Nettles stayed onstage to close out the medley with the aforementioned “Prayer,” helping the band close out the medley with characteristic high energy.

Wyclef Jean, a native of Haiti, thanked the United States for its generosity in the wake of the devastating earthquake that recently struck the island. He introduced Blige and Bocelli, who teamed for a beautiful and graceful duet of Simon And Garfunkel’s aforementioned classic “Bridge Over Troubled Water” â€” which is celebrating its 40th anniversary GRAMMY wins for Record and Album Of The Year. Bocelli opened in perfect voice and was joined by a stunning Blige, turning in a unique performance, raising voices in support of those in need.

Special presenter Adam Sandler congratulated the Dave Matthews Band on its 20th anniversary before the group, nominated for two GRAMMYs, launched into “You And Me” off Big Whiskey And The GrooGrux King. A string section and members of the GRAMMY Jazz Ensembles backed the upbeat performance that reinforced the reasons for the band’s longevity: artistic sense, limitless imagination and, possibly, freewheeling dancing that owes more to fun than gracefulness.

Maxwell, who was nominated for six GRAMMYs, may have disappeared from music for a few years, but he â€” like Roberta Flack, with whom he shared a tender duet on the classic “Where Is The Love” â€” is not easily forgotten. Flack’s rich warm vocals fit like a glove around Maxwell’s sexy neo-soul vocal tone. And though Flack’s voice can’t help invoking ’70s nostalgia, Maxwell’s modern touches imbued the song with retro-hip stylishness. The effortless charm of his opener “Pretty Wings,” from his GRAMMY-winning album Blacksummers’ Night, instantly got to the heart of why Maxwell was sorely missed during his long hiatus.

Actor Jeff Bridges has an underdog’s reputation, which made him an excellent choice for presenting the evening’s Les Paul tribute. Paul, the incomparable musician and guitar innovator who died in 2009, was honored with a high-spirited and clearly heartfelt performance by GRAMMY-winning guitar legend Jeff Beck, who appropriately brandished a Gibson Les Paul, and vocalist Imelda May on the chestnut “How High The Moon.”

Combine rappers Drake, Eminem and Lil Wayne and what you get is a whole lot of swagger and personality â€” maybe too much â€” to fit into one GRAMMY performance. Not so. On the “Drop The World”/”Forever” medley, Eminem spat mightily before Drake fell in to offer up proof of the following “Forever” lyric: “Like a sprained ankle boy/I ain’t nothing to play with.” Weezy’s moment came late, but wasn’t diminished. The hip-hop superstar trio added up to one of the night’s most pumped-up performances, providing a punctuating finale to the evening’s musical lineup.

The evening’s final statue was presented to Swift for Album Of The Year, which the young singer/songwriter accepted with youthful exuberance and a surprising long-term point of view:

“This is the storyâ€¦when we are 80 years old, and we are telling the same stories over and over to our grandkids, and they are so annoyed with us, this is the story we are going to be telling over and over again: In 2010 that we got to win Album Of The Year at the GRAMMYs!”
www.grammy.com
FULL WINNERS LIST:
ALBUM OF THE YEAR: “Fearless,” Taylor Swift

RECORD OF THE YEAR: “Use Somebody,” Kings of Leon

BEST COMEDY ALBUM: “A Colbert Christmas — the Greatest Gift of All!,” Stephen Colbert

BEST POP PERFORMANCE BY A DUO OR GROUP WITH VOCALS: “I Gotta Feeling,” the Black Eyed Peas

BEST ROCK PERFORMANCE BY A DUO OR GROUP WITH VOCALS: “Use Somebody,” Kings of Leon

BEST R&B PERFORMANCE BY A DUO OR GROUP WITH VOCALS: “Blame It,” Jamie Foxx and T-Pain

BEST RAP PERFORMANCE BY A DUO OR GROUP: “Crack a Bottle,” Eminem, Dr. Dre and 50 Cent

BEST COUNTRY PERFORMANCE BY A DUO OR GROUP WITH VOCALS: “I Run to You,” Lady Antebellum

BEST COUNTRY COLLABORATION WITH VOCALS: “I Told You So,” Carrie Underwood and Randy Travis

BEST POP/CONTEMPORARY GOSPEL ALBUM: “The Power of One,” Israel Houghton