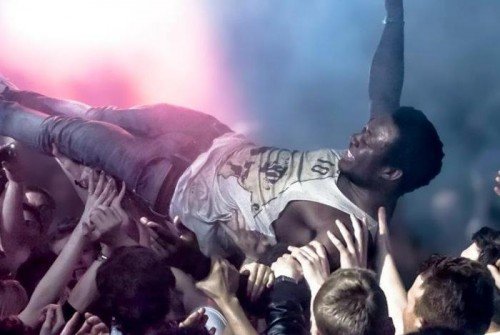 The idea (by Christopher Barrett and Luke Taylor) for Benga’s ‘I Will Never Change’ was to recreate the waveform of the record by animating carefully measured and cut to size pieces of vinyl. All 960 pieces of it.

“Once we had the idea, the next problem was trying to figure out how to actually do it. At first it was a lot of maths homework, calculating the number of records per second against the frame rate. It worked out to be 960 records would be the equivalent of 1 minute and 20 seconds worth of wave form.

Each one had to be individually cut to a specific size, hand labeled, hand numbered and then finally polished. We would say just that process took 7 full working days alone. To animate the wave form, we built it and then carefully removed each individual record.

This had to be done very gently as any shift in the position of the sculpture would result in the failure of the animation and as we had to literally destroy each piece of vinyl to get it off, there was only one chance to get it right. Once the sculpture was finally built, the animation process took about 30 hours.”
benga.co.uk
weareus.co.uk
academy-plus.com