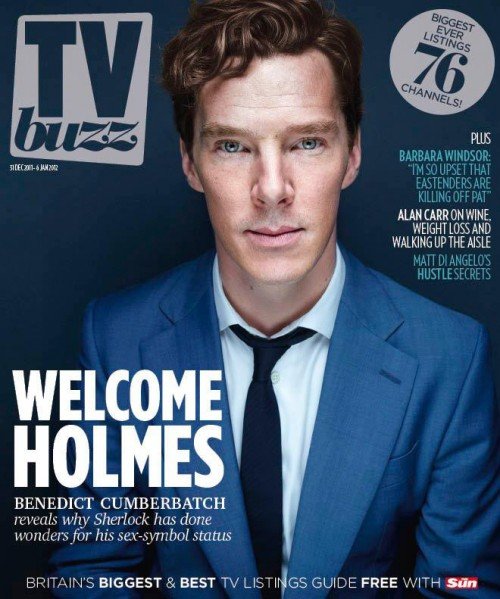 Benedict Cumberbatch chatted to TV Buzz Magazine from The SUN and explained why Sherlock Holmes has made him a heart-throb: “Looking at Sherlock and his track record with women, you’d think they’d run a mile, but weirdly a certain amount of harsh treatment excites people.”

He explained, “It’s a bit of a ‘treat ‘em mean to keep ‘em keen’ thing.” Benedict told TV buzz, “I guess it’s not just the role, it’s the level of profile it produces. I’m suddenly a bit more acquirable.”

Benedict starred with Jonny Lee Miller in the award-winning production of Frankenstein at London’s National Theatre.

His fans would even wait for him past midnight: “There were an awful lot of people…It was 12 o’clock, I was tired and I was saying I’ve really got to get home but there were people going: ‘We’ve travelled all the way from South Korea!’ It was incredible.”

He recalled, “Someone once sent me a page of lookey-likey pictures which had a Sid from Ice Age, a house, a llama, a hammerhead shark and a meerkat.”

Benedict had an extremely memorable moment in 2010 when the first episode of the BAFTA-award winning Sherlock was broadcast; eight million viewers tuned in to watch it.

“I remember that night sitting in the garden with the show’s producer Sue Vertue,” explained Benedict, “and all the ‘Twittery’ army really started to…well, I don’t look into Pandora’s box when it comes to all that, but it was crazy. By the end of the show we were ‘trending’. And apparently that’s brilliant.” It certainly is!

Benedict was pretty satisfied about the success of Sherlock Holmes: “I’m a bit sick of hearing people say: ‘Oh God, I wanted to hate it so much, but I was surprised by how much I loved it’ – even though it is a very positive thing. I think we silenced a lot of the doubters.”

Benedict is back in the public eye: “People don’t shout ‘elementary’ to me, which is nice. But getting recognised as Sherlock is a bit weird.”

But fame can have its downside: “I do have a really irritating response when people come up to me and ask: ‘Are you Sherlock Holmes?’ I say: ‘I just look a bit like him, I’m not actually Sherlock.’” That’s what you get for being famous!
The Sun TV buzz
facebook.com/TVbuzzmag
#BenedictinTVbuzz