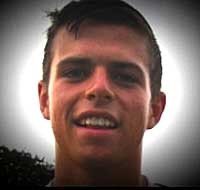 17 year old Ben Greenhalgh, has proved he has exactly what it takes to become FOOTBALL’S NEXT STAR by winning the JAMIE REDKNAPP-fronted football talent show and scoring a once in a lifetime prize “ a contract with JOSE MOURINHO’s Serie A champions Inter Milan.

The Christian, who has been a body double for Cristiano Ronaldo, fought off stiff competition from Irishmen Connor Smith and Craig Walsh in Sunday’s gripping finale. After Craig’s elimination earlier in the show, Ben and Connor were left to battle it out in a decisive training session with Inter Milan’s first team playing alongside world class footballers PATRICK VIEIRA, MATERAZZI and ETO.

In the thrilling climax, JAMIE REDKNAPP and the finalist’s families gathered at Interello to hear who had been crowned as Football’s Next Star. On hearing the news, an ecstatic Ben was speechless, but later said This is the best day of my life its just an unbelievable feeling. Jamie added Ben is now officially Football’s Next Star and I am very proud of him.

Italian football is perfect for him “ it suits his style of play. JOSE MOURINHO himself presented Ben with his Inter Milan shirt and since recording the show, he has been signed up by top football agency SEM, whose clients include RIO FERDINAND, EDUARDO and IAN WRIGHT.

Inter coaches MARCO MONTI and PAOLO MIGLIAVACCA were looking for the very best undiscovered talent from across the UK and Ireland. Thousands of boys from across England, Ireland and Scotland applied and ten were chosen to fly to Italy where they have had just over a month to prove they have what it takes to make it in Italian football.

During their time in Italy, the 10 lived in a luxury villa beside spectacular Lake Como, where they were fully integrated themselves with the culture and the Inter Milan youth team at the prestigious Inter Academy, Interello. They were mentored by JAMIE REDKNAPP throughout the series. Football legends LUIS FIGO, PATRICK VIEIRA and JOSE MOURINHO also offered the boys invaluable tips on how to up their game.