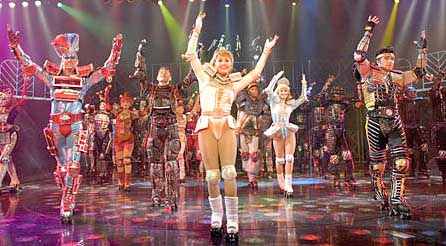 
Catch the biggest and fastest show on earth! â€œSTARLIGHT EXPRESSâ€ is calling at the GRAND OPERA HOUSE for a limited 2 Â½ week season from Wednesday 3rd â€“ Saturday 20th October.

The new and re-designed production of â€œSTARLIGHT EXPRESSâ€, began its first ever UK tour in November 2004, premiering at the Manchester Opera House. This sensational musical spectacular enjoyed runaway success on its 2004/5 tour, thrilling audiences nationwide with its sheer energy, excitement and daring physicality.

David Ian (producer of â€œSTARLIGHT EXPRESSâ€ and Chairman of Global Theatre for Live Nation) says, ‘After the huge success we enjoyed with â€œSTARLIGHT EXPRESSâ€ throughout the UK with the first tour, Iâ€™m thrilled to be playing even more theatres in 2006 & 2007 with one of Andrew Lloyd Webber’s biggest ever hit shows – truly a family spectacular for everyone in the UK to enjoy.’

Simply light years ahead of the rest, this futuristic tale of the triumph of love and hope in the face of adversity is a feel good musical with something for everyone. Including over 20 of Andrew Lloyd Webberâ€™s greatest songs and all the thrills and spills of roller racing action, â€œSTARLIGHT EXPRESSâ€ brings audiences a performance with speed, spectacle and turbo-charged excitement.
â€œSTARLIGHT EXPRESSâ€ is specially created by members of the showâ€™s original creative team, including legendary designer John Napier (â€œCatsâ€, â€œLes MisÃ©rablesâ€, â€œMiss Saigonâ€) and choreographer Arlene Phillips (â€œGreaseâ€, â€œSaturday Night Feverâ€, BBC TVâ€™s â€œStrictly Come Dancingâ€ and â€œStrictly Dance Feverâ€). It also includes the exciting new element of cutting edge 3D technology by Julian Napier (â€œCatsâ€, â€œTimeâ€, â€œWe Happy Fewâ€).

â€œSTARLIGHT EXPRESSâ€ is one of the worldâ€™s longest running musicals. It opened at the Apollo Victoria Theatre on 27 March 1984, where it played to more than eight million people until its final performance on 12 January 2002. During its triumphant 18 years in the West End, the show took a staggering Â£140 million at the box office and achieved international success with productions in the USA on Broadway, in Las Vegas and on tour in Japan, Australia and Germany.

The 2007 UK tour of â€œSTARLIGHT EXPRESSâ€ is produced by David Ian for Live Nation (formerly Clear Channel Entertainment) and is presented by special arrangement with The Really Useful Group Ltd.