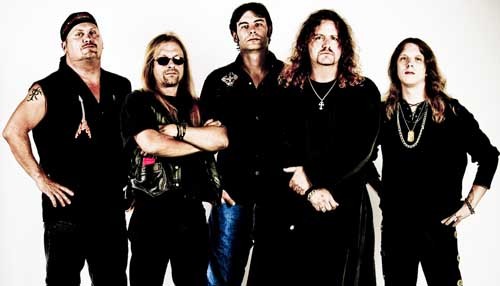 Skinny Molly are:
Mike Estes â€“ lead guitar, lead vocals.
Mikeâ€™s band, Helen Highwater (named by Lynyrd Skynyrd guitarist Allen Collins) had played just about every club and had opened for almost every Southern rock and Outlaw country band throughout the Southeast and Midwest for ten years. While in high school, Mike became friends with the guys in the Rossington Collins Band (founded by the Skynyrd plane crash survivors) who had decided to do the Lynyrd Skynyrd tribute tour in 1987, bringing Helen Highwater on to open some shows for them. In 1992 Mike began going on the road with Skynyrd to write songs for an upcoming album, and signed a publishing deal with Skynyrd guitarist Ed Kingâ€™s publishing company, I Canâ€™t Read Music. He had been writing with the band for six months when he was asked to join as a guitarist. Mike spent the next three years touring, writing and recording with his favourite band, appearing on the â€™94 Capricorn release, â€˜Endangered Speciesâ€™, â€˜95â€™s live recording â€˜Southern Knightsâ€™ and the â€˜100 minutes with Lynyrd Skynyrdâ€™ video. After moving to Tennessee Mike co wrote and song with Jonny VanZant and Gary Rossington for Sony Musicâ€™s â€˜Hotter Than Asphaltâ€™ CD called â€˜White Knuckle Rideâ€™ that broke the billboard charts most recently the song is being used in a CMT movie called â€˜True Grit; The Junior Johnson Storyâ€™ as well as in a video game released in conjunction with the Disney/Pixar movie â€˜Carsâ€™ released in June 06.Since leaving Skynyrd, Mike has released two CDâ€™s; Drivinâ€™ Sideways and Brave New South, logged over 200 European dates, and has appeared on many Euro TV and radio music shows. In the States, Mike has appeared on HBO, CMT, CNN, MTV, VH-1 and others. He has been profiled in â€œGuitar Playerâ€, â€œguitarâ€, â€œAcoustic Musicianâ€, and other major music magazines, and was inducted into the Hollywood Rock Wall of Fame in 1995. Lynyrd Skynyrd was inducted into the Rock and Roll Hall of Fame in March 06.

Garry Nutt â€“ Bass
Gary has spent years building an esteemed career as a bassist who can do it all. He was born in England and learned to play drums as a child, but soon turned to guitar. Upon realising there were so many guitar players around, he decided to move to the bass as his instrument of choice. He was signed to a record deal with the band Tangier and spent several years with them. He also toured extensively with other groups, among them Chubby Checker, Cinderella and most recently southern rock band â€œLaidlawâ€, having appeared as the bassist on their album. Garry was brought into Skinny Molly after playing a gig with Mike in Florida. Garry loves fishing, dogs, collectables and Ebaying. . . and he has the hottest collection of basses around.

Kurt Pietro â€“ Drums
Kurt started playing sixteen years ago at his parents house, playing along with records that featured his favourite drummers, including Jakson Spires of Blackfoot and Bob Burns of Lynyrd Skynyrd. Kurt had spent six years in the proverbial woodshed when a friend of his neighbours heard him practising and asked him if he would like to join a band. Kurt accepted, and spent a few years playing clubs and casinos with the band Crystal, as well as doing studio work around the Marquette, Michigan area. Kurt attended the Northern Michigan University where he majored in broadcasting and music. This led to a gig working in Omni Studios in Nashville, Tennessee, where he met Mike Estes. Mike was in need of someone to overdub a drum part. Kurt mentioned that he played drums. He knocked out the part and is now smashing skins for Skinny Molly.

Keith Whalen â€“ Guitar/back up vocals
Keith is a South Florida native that grew up in a house full of music. His father is a professional musician, and Keith picked up a guitar at an early age, and was playing in clubs by the time he was sixteen, blowing most of the older, local guitarists off stage at jam sessions and earned his nickname â€œthe Kidâ€. It was at this time he met Garry Nutt, and the two played together in various bands. Keith credits Eric Clapton, Keith Richards and other blues oriented players as his inspiration. Keith came into Skinny Molly on Garryâ€™s recommendation, and did his first tour with the band in the Fall of 05 and is appearing on Skinny Mollyâ€™s debut CD.
SKINNY MOLLY
Featuring Mike Estes from Lynyrd Skynyrd
Monday 15th October
Spring & Airbrake
Tickets Â£12.00
Doors 8pm
Tickets on sale now from Katy Dalyâ€™s, Virgin & all usual Ticketmaster outlets. Credit card bookings & info: 0870 243 4455 or book online at geturticket.com