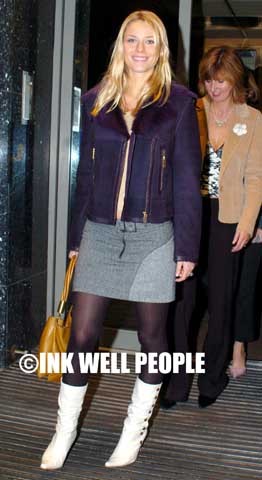 By Andrea Clarke
Photo by Fabrizio Belluschi
BELFAST-born granddaughter of Hollywood icon Charlie Chaplin, Kiera Chaplin showed off her sexy strut at a New York premiere this week.
The model and actress, daughter of Eugene Chaplin, who was the fifth child of the legendary comic and his last wife, Oona O’Neill, joined supermodel Helena Christensen, actor Toby Kebbell and director Anton Corbijn at the screening of Control at the West Chelsea Theatre.
No stranger to the film business, the young starlet has already appeared in six films, including the soon to be released crime dram Japan, starring Peter Fonda, and chairs her own film company, Limelight Films.
And itâ€™s Kieraâ€™s dream to make a film about her rebellious grandmother Oona.
“I may play Oona myself in the movieâ€, she said.
“Some people tell me I look like my grandfather, and other people tell me I look like Oona. They say I have Oona’s smile and I have Charlie’s eyesâ€.
Oona, daughter of Irish-American playwright Eugene Oâ€™Neill, married 54-year-old Chaplin when she was just 18 and was disowned by her father.
Kiera said: “Oona never stopped writing him [her father] letters, looking for his affection.
“She even named my dad Eugene after her dad.
“I never knew that much about the O’Neill side of the family. I wanted to read Eugene O’Neill’s plays when I was very young, but my dad wouldn’t let me, he said I wouldn’t understand them.
“I’ve still never seen one of his plays, but I would love to, hopefully soon.
â€œAnd I would love to do theatre, but I don’t think there are any roles in his plays for me. They’re all too old and depressing. Not exactly right for meâ€.
The sexy model, who infamously posed topless, is also set to take part in a biopic of the Dominican playboy Porfirio Rubirosa, called Chasing Rubi and she hopes to work with some of Hollywoodâ€™s top directors.
She added: â€œI want to work with directors like Tim Burton and Quentin Tarantino, because their movies are dark and kind of dangerousâ€.