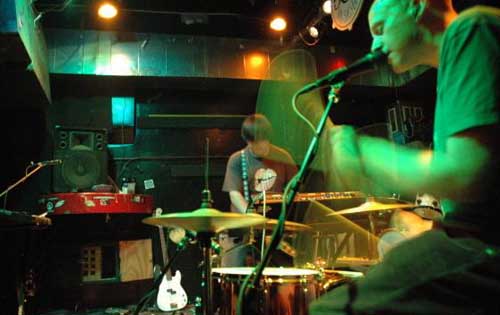 With a style that combines the manipulative songwriting smarts of Daft Punk with the exuberant power-pop of early Weezer, Belfast-based duo Oppenheimer are set to restore the three-minute pop song to its rightful throne. Oppenheimer will perform @ Whelans on May 3rd and The Empire on May 18th.

Shaun Robinson and Rocky Oâ€™Reilly first met at an Icelandic electronica show and soon realised they shared a love of kraut-rock, synthesizers and soundscapes. Recording lush, multi-layered music was initially their escape from a rainy Irish winter. Writing summer-pop songs took their minds to other places, the neon sparkle of Times Square, the blue skies of California… they suddenly felt a lot brighter about their hometown. Oppenheimer was formed and they began to record. The bandâ€™s Northern Irish roots were reinforced by the endorsement of renowned DJ David Holmes, who loaned the band equipment and by Ashâ€™s Tim Wheeler who has also collaborated with the band, appearing as guest vocalist on early track â€œOrchidâ€. Oppenheimerâ€™s debut self titled album was released in 2006 by the acclaimed US indie label Bar-None. The band have recently shared stages with names like Tilly and The Wall, Architecture In Helsinki, Regina Spektor, Hot Chip and supported They Might Be Giants on a giant 50 date stateside tour. To add to this success they have also had songs featured on Ugly Betty and hip new U.S comedy Gossip Girl.

New album â€œTake The Whole Mid-Range And Boost Itâ€ was recorded in the bandâ€™s own Belfast studio and continues their disarming fascination with synthesizer fuzz and boisterous, bright pop. The album combines the admitted influences of Brian Eno, Kraftwerk, and My Bloody Valentine with the spirited harmonies and concise compositions of Brian Wilson. With twelve new songs including a guest appearance from Matt Caughtran from thrash punk god-heads The Bronx, the new record embraces some pretty esoteric themes: politics, fireworks in New Jersey and Cate Blanchett impersonators to name but a few.