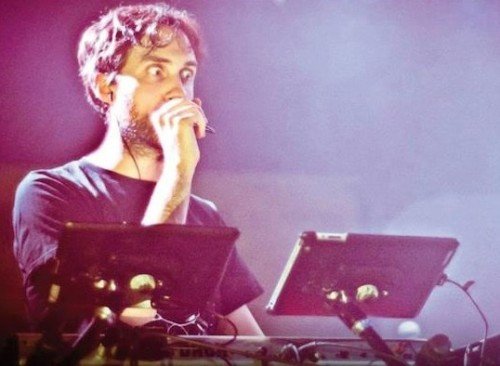 Fresh from major festivals across the UK, TED in LA, two Coachella shows and a USA tour, the incredible Beardyman brings to the UK for the first time, his own custom build performance technology called BEARDYTRON_5000mkll. His UK Beardytron_Beta_Tour features dates in London, Glasgow, Sheffield & Norwich.

I guess I’d like to kick off by asking you how you are feeling about the Uk tour next week?

What can fans expect from the Beardyman live show?

Songs, some of which I wrote years ago, some I wrote a couple of months ago, some which I’ll write on the night. Also sick basslines and disgusting beats which will eat your mind and spit it out all fucked up n shit. 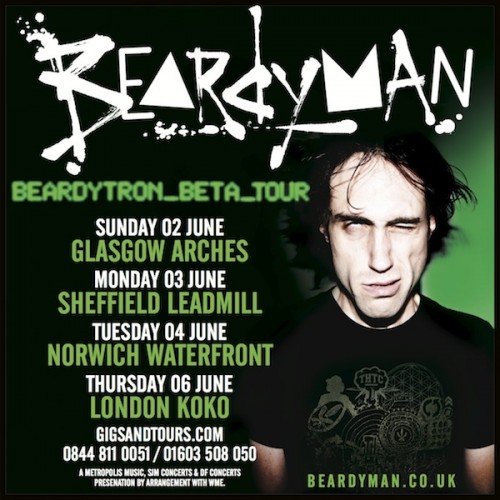 For any of our readers yet to hear your work. How would you describe your brand of music to them?

Awful…horrible noise…then really nice bits…and then bits that spoil it…and really good bits, then a cacophony of despair and pain…then redemption…and eventually orgasm, but a dry heaving one interlaced with shame.

You have been touring a lot we hear. Do you enjoy life on the road?

Yeah, It’s dope…but I fucking hate airports..their boring…then someone gives me a spliff and some booze and a stage and a screaming crowd and I’m happy. I’ve got a good crew though…we have a good laugh. It’s dope… 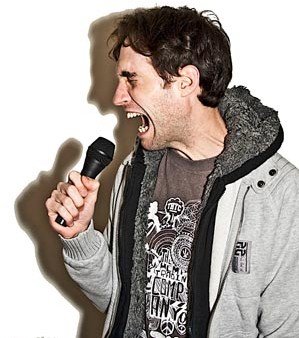 I keep reading about the Beardytron_5000_mkII. Can you tell us exactly what it is?

The Beardytron is a next level music making platform which enables the user to start with no preconceived notion of what they are going to do and progress in real time to a fully formed composition, song, mix, atmosphere, anything really.

It’s my life’s work and it’s never going to be finished. But crucially, it’s in a state where i’m desperate to show it to people. It’s taken 6 years from conception to stage-readyness…I love it.

Do you consider yourself an innovator in the world of music. For example do you look forward to seeing others emulate your style or model themselves on you?

I don’t know what I am…that’f for other’s to decide…All I’ll say is that my upcoming EP may surprise people. It’s gonna be pretty mental and there won’t be a single joke track on it. I’m working on an album of songs I’ve written throughout my life.

I love making music…It’s what stops me jumping in front of a train. I’d prefer to be considered an innovator rather than a novelty artist. So if i have some people dissing what I’m doing or the change I’m making then they can fuck off.

How do you feel about musical collaborations. Do you have any artists that you would long to work with on a project?

I recently hooked up with herbie hancock and jammed. He was dope. He’s a legend…that was pretty sick…I’ve got loads of people I’ld like to work with…most of all, majella ZEE ZEE diamond…she’s a genius.

What does the rest of summer hold for you (beyond these UK dates)?

Some festivals…an Edinburgh show which will be a kind of comedy show…comedy in the sense that it will be quite funny. it’s called one album per hour. In it I make an album in an hour with the audience making up the song titles…its rad…no one says rad anymore…they should…say rad…59 times.

I have read a few pieces on yourself that mention an album in 2013. Is that something you are still working on?

I must ask you where the name Beardyman came from. Our readers do love a good band name story.

HA!!! WELL!!! It’s a funny story…basically…there was this girl…one night…I was like…so she said… and THAT…as they say…was that…SO YEAAH!!!!!! hey…I’m hungry…who wants some ice cream???

How did you get started in the industry?

By being young and hungry for never getting a job. Now I’m just hungry…but I don’t have a job…I might have a sandwich. Do you want one…I’m going down the shop.

Finally what do you think about digital downloads and the affect they have on bands. Also as a side note are you active in the world of social media?

I couldn’t give a fuck…It seems no one makes money from selling music apart from people who make shit music, so what are you gonna do. Social media? what’s that? Can I go now?