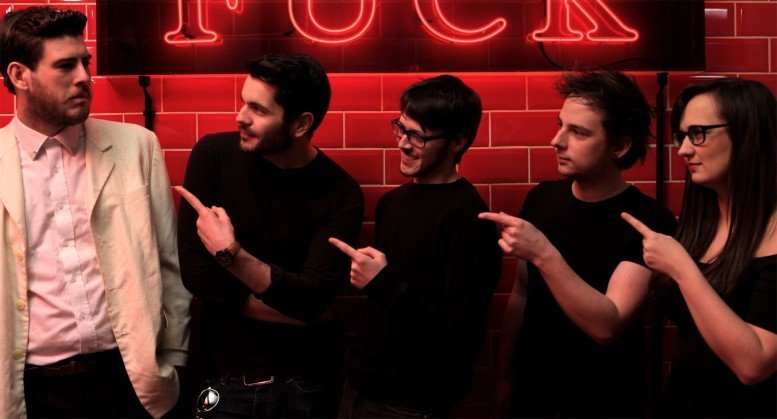 So, ‘Drunken Grrrls’.. there’s a song title that has to have a story behind it. Can you divulge?

AMY: Don’t be surprised – but it is about getting drunk. There’s not a lot too it. If you really wanted to you could say that it is subversive to the usual pop song in terms of the role reversal. There is a bit of a common theme in our songs…

While we’re at it, is there a story behind the name ‘Beach Fatigue’? Or did NOFX send the boys round to ‘politely’ ask you to drop ‘Heavy Petting Zoo’ (which has one of the most obscene album covers we’ve ever seen. And bought.)

AMY: Yes – we finally changed the name after toying with the idea for a long time. We certainly aren’t NOFX fans, and thought it was best to get rid of that association before releasing any more music.

BILLY: No one likes toilet humour-level puns and jokes in their punk rock, surely…

What’re things like on the live scene at home. You’re from Wales, aren’t you?

BEN: Wales seems to be getting more and more attention at the moment – and hopefully that continues.

BILLY: We always recommend people to come to festivals in Wales – like Cardiff’s Swn as well as Green Man, and there you will see lots of great Welsh acts that you might previously have missed. Hopefully we’ll all start spreading out and playing to the rest of the UK.

There’s a bit of psychobilly flavour to your single. Who would you say your influences are?

BEN: We like the garage-rock side of psychobilly and are fans of The Cramps. And even before that – people like Link Wray and Dick Dale always turn up in the sound of modern surf-rock music.

AMY: In the past I’ve had comparisons to PJ Harvey and front women like Karen O and Siouxsie Sioux – which I think is fair enough.

When and where is the next show?

BILLY: Our next show is in November at Swn Festival in Cardiff. We had a great time when we played in 2013 – and this year they have The Go Team! and our friends at Tender Prey playing.

And what next once the single is unleashed?

AMY: Hopefully the album will follow shortly afterwards – or by the end of the year at least!