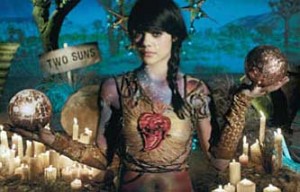 Bat for Lashesâ€™ album Two Suns has been nominated for the 2009 Mercury Prize.

This is the second nomination in as many records for the delectable Natasha Khan, who was the only multiple nominee on this yearâ€™s list, elevating her into the ranks of other Mercury veterans like Radiohead, PJ Harvey, Amy Winehouse and Arctic Monkeys.

The winner is due to be announced live on BBC Two on Tuesday 8 September 2009.

Following an immense Glastonbury show, an epic Somerset House performance and a packed out headline set at Latitude, a full UK tour has been announced for October with two nights at the Roundhouse in London.

Khan continues to delight audiences and critics alike with her magical live shows, with Johnny Depp being the latest in a long line of high profile fans proclaiming Two Suns to be a â€œmasterpieceâ€ when interviewed on Radio 1 recently.

Added to that, Coldplay have asked Natasha to join them for two dates in Europe this September.

â€˜Sleep Aloneâ€™, the third single to be taken from the acclaimed album Two Suns, combines a nagging acoustic riff with dark disco beats, fluttering strings and Natashaâ€™s spooked falsetto vocal; â€œMy mama told me / the dream of love is a two-hearted dreamâ€.

=The second track is the slower paced â€˜Moon & Moonâ€™. Beautifully recorded, the simple, lush piano melody paired with Natashaâ€™s silky vocal yearning over long distance love and the pain of separation is a startling reminder of her effortless knack for straight-to-the-heart songwriting.

The new single â€˜Sleep Aloneâ€™ is released on 7 September and a full UK tour has been announced for October with very special guests Yeasayer, who played on several tracks from Two Suns.