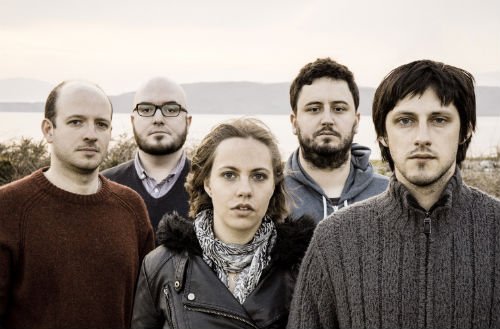 Why you should listen…The band have talent in abundance that has allowed them to create a sound so beautifully composed. Exquisite soundscapes, instrumental passages and an experimentation that doesn’t isolate the listener instead, it captivates the listener and makes you waiting to come back for more…Sounds Like: Sigur Ros, Agnes Obel, Bon Iver…


Hi Turning Plates how are you?

Well thank you. We had one of our more unusual gigs last night as part of a Scottish Green Party Fund-raiser.

How did the name come about? Car enthusiasts or cake icing experts?

Haha this is Duncan’s job: I always hate explaining this. So when the band first started I felt a lot of bands were dedicated to the cynicism against believing in intangible things, which I liked the romanticism of. So Turning Plates is just a metaphor for the planet in the most plain and least romantic sense, a collection of turning continents or tectonic plates or whatever you want to go with. (Most people assume it’s a rip off of the Radiohead song ‘Like Spinning plates, which would be a lot easier to explain)

You are gearing up for your debut album release ‘The Shouting Cave’ at the end of September are you excited?

Absolutely… it’s been pretty much 2 years since we started working on it so it’s been a long time in the making!

The concept is based on our interaction with the internet and how it has effected us a society. How did you come up with this concept?

Well it was partly through observation of friends on social media and it had been growing in our minds for a while. The thing that solidified it as something that we felt strongly needed to questioned, was watching the TV series Black Mirror. We want to stress that we don’t think the internet is a bad thing, but we do think that we don’t question how we use it as strongly as we should. In many ways it’s the big philosophical question on society of our age. Did you use the concept as an influence in your writing and build from there or did you already have the basis of album tracks arranged?

We decided that as the internet was basically a new world and that we’d base the album in that world. We imagined it as a new wilderness we’re born into where we have to learn how to interact from scratch. The idea of wilderness definitely influenced the sound and we built up stories in the world from there.

How does the writing process in the band work? Is there a principe writer of the music/lyrics or do the whole band have an input?

Generally Duncan will come up with the main chunk of the song and from there we’ll all develop and edit it (usually in heated debates) to the finished product.

‘Falling Lives’ was a rather beautiful video. Who came up with the idea and how did you get involved with such talented dancers?

Well I have to admit to a bit of nepotism here. Duncan’s younger brother Malcolm is a dancer with the State Theatre Ballet in Nürnburg. We agreed it would be nice to do something together and we asked Freya Jeffs who he knew from college and from there we developed the idea around the theme of the song.

You have been compared to the likes of Sigur Ros and Agnes Obel. Do you think these bands are representative of the band? Where do you think your music fits?

Flattering comparisons, but we think/hope so. We definitely try to reach out towards post-rock soundscapes but a lot of our music is in the more traditional verse chorus vain but we try to keep arrangements varied and the chord structures a little of the beaten path.

Is it difficult being an independent band in today’s climate or do you think there are more opportunities for up-and-coming bands like yourselves?

I think it’s always been hard. Now there’s so much independent music everyone gets lost in the white noise. You just have to keep working hard and hope that people discover you and discover something in what you do. I think you need someone external to the band to really fight for you to so that comes down to a bit of luck! We’ve had some good opportunities and we were obviously delighted to get financial support from Creative Scotland.

What can we expect from Turning Plates for the rest of 2014?

We’ve got our album launch in Glasgow at The Old Hairdressers on the 27th of September. Then we’ll be touring down south for a week or so in October. After that we just have to see how the album goes down and work from there!