The Backstreet Boys have sold more than 75 million albums worldwide making them the biggest selling boy band of all time. 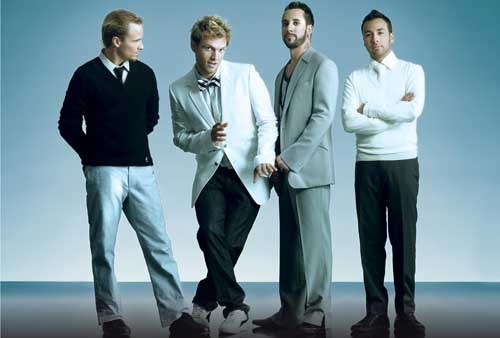 Their first two U.S. releases both received the Diamond Award for sales of more than 10 million: Backstreet Boys in 1997 and quintessential Millennium in 1999, which reached No. 1 in 25 countries.

They have scored a dozen top 40 hits, including top 5 smashes Quit Playing Games (with My Heart), As Long As You Love Me, Everybody (Backstreet’s Back) and All I Have To Give. They released their fifth studio album Unbreakable this autumn.

It’s hard to believe that 15 years have passed since Backstreet Boys redefined the modern musical landscape, ushering in a chapter of pop culture that commandeered the world’s radio airwaves, broke music and concert sales records, and launched a new generation of teen idols for millions of youth. You were there: Remember the cool, silken harmonies, the passion-fueled mania that followed their every move? Perhaps you even had a BSB poster on your wall.

In all, the group has sold more than 75 million albums worldwide. Their first two U.S. releases both received the Diamond Award for sales of more than 10 million: “Backstreet Boys” in 1997 and quintessential “Millennium” in 1999, which reached No. 1 in 25 countries. They have scored a dozen top 40 hits, including top 5 smashes “Quit Playing Games (with My Heart),” “As Long As You Love Me,” Everybody (Backstreet’s Back)” and “All I Have To Give.”

A lot has changed since 1997, when we first got to know the five singers comprising Backstreet Boys: Nick Carter, Howie Dorough, Brian Littrell, AJ McLean and Kevin Richardson. Today, like their fans, they have grown up and started families, recorded solo projects, and appeared on the Broadway stage, all while dealing with the trials and tribulations that accompany fame at an early age. Also notably, in 2006, Richardson amicably decided to exit the group, with the full blessing of his teammates.

But as we hear on their sixth album, “Unbreakable,” what remains gloriously synonymous are BSB’s indelible melodies, hooks galore and finely crafted three- and four-part harmonics, demonstrating that these guys have matured into talented musicians who still love what it is they do so well.

All 13 tracks on the set demonstrate an organic ease with material that is an ideal fit. “Helpless When She Smiles” is another stunning hit-worthy midtempo ballad, produced by Grammy-winning John Shanks (Kelly Clarkson, Sheryl Crow, Bon Jovi, Hilary Duff). A number of other tracks were produced and co-written in Nashville by Dan Muckala, who worked with Backstreet Boys on previous album “Never Gone.” Among his standouts is the moody Beatles-esque “Unsuspecting Sunday Afternoon”â€”a song that all four singers herald as a highlight of the set. BSB asked heralded songwriter Billy Mann to collaborate on the song with Muckala. The result, says Brian, “is a love story, but with an unexpected message that really makes you think. Melodically, the bridge becomes another song, which I love. It’s really all about the emotion of the vocals, and it’s different than any other track we’ve recorded.”

Also among priorities this time around, BSB wanted to include enough uptempo tracks on the new album to showcase in their trademark kinetic live shows. Synthesizer-soaked “Everything But Mine,” playfully frenetic “Panic,” galloping “Any Other Way” and creepy crawler “One in a Million” ably fit the bill.
While it would be clever enough to declare that “Backstreet’s Back”â€”hearkening the title of their hit songâ€”the truth is they never went away. Over the course of 15 years, they maintain rare relevance in an industry that so often disposes of pop acts with ultimate haste.

And, notes AJ, “We’ve been part of this group for half our livesâ€”it’s crazy to think about. If you asked me in 1992 if I’d still be a Backstreet Boy in 2008, I’d have thought we’ll make some records together and have a good little run. But we continue because we love what we do. We thrive being onstage and seeing the faces of little girls and boys and couples and grandmothers, all cutting a jig in the front row. If we were to write a book based on our experiences, I think it would be longer than ‘War and Peace.’ When I’m a grandpa, I’m going to have a lot of stories to tell.”
BACKSTREET BOYS
Monday 12 May 2008
Tickets on Sale Friday 1st February @ 9am
Tickets Â£33.00 & Â£30.00 on sale Friday 1st February from Odyssey Box Office & all Ticketmaster and usual outlets
Credit Card Bookings 028 9073 9074 & 0870 2434455
Book online @ ticketmaster.ie & wonderlandpromotions.co.uk
thebackstreetboys.com
myspace.com/backstreetboys