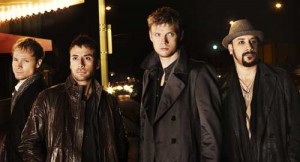 The best selling boy band of all time, BACKSTREET BOYS have just announced they will play The Odyssey Arena on Thursday 12th November.

Nick Carter, Howie Dorough, Brian Littrell, and AJ McLean will be performing some of their chart-topping hits like Quit Playing Games (with My Heart), As Long As You Love Me, Everybody (Backstreetâ€™s Back) and All I Have To Give, as well as debuting new material from their seventh studio album This is Us which is due for release on 2nd October.

BACKSTREET BOYS redefined the modern musical landscape, ushering in a chapter of pop culture that commandeered the worldâ€™s radio airwaves, broke music and concert sales records, and launched a new generation of teen idols for millions.
Backstreet Boys – More Than That


Backstreet Boys – “Shape Of My Heart”
by Markevin

In all, the group has sold more than 76 million albums worldwide. Their first two U.S. releases both received the Diamond Award for sales of more than 10 million: â€œBackstreet Boysâ€ in 1997 and quintessential â€œMillenniumâ€ in 1999, which reached No. 1 in 25 countries.

OnThis is Us, BACKSTREET BOYS collaborated with a powerhouse suite of producers and songwriter that included T-Pain, Max Martin, RedOne, Soulshock and Karlin, Jim Jonsin and Claude Kelly. The end result is an indelible and finely crafted R&B and pop album from four talented musicians who love what they do and who maintain the rare relevance in an industry that often disposes of pop acts. From the undeniable dance floor ready lead single, Straight Through My Heart to the reflective soar of Bigger, from the hook crazy Bye Bye Loveâ€ to the romantic yearning of Sheâ€™s A Dream,This Is Us shows remarkable growth as songwriters and continues to give us songs that has made millions smile.

A lot has changed since 1997, when we first got to know the five singers comprising BACKSTREET BOYS: Nick Carter, Howie Dorough, Brian Littrell, AJ McLean and Kevin Richardson. Today, like their fans, they have grown up and started families, recorded solo projects and appeared on the Broadway stage, all while dealing with the trials and tribulations that accompany fame at an early age, including substance abuse, management snafus and even major health issues. Also notably, in 2006, Richardson amicably decided to exit the group, with the full blessing of his teammates.