Avril Lavigne opens up to The Lowdown with Diana Madison, in an exclusive interview where she talks babies and gushes about her husband Chad Kroeger.

The newly 29 year pop-rock princess gushed to host and founder of Hollyscoop TV, Diana that the greatest gift was being able to see her hubby, Nickleback frontman, Chad Kroeger. Just recently married in July, the two musicians have been separated for the last two weeks as he’s been on tour in South America and she has been busy promoting her new album in Los Angeles.

Avril told ‘The Lowdown with Diana Madison’: “Well, we’ve only been apart for 10 days and … the best birthday present by far is getting to be with him and see him.”

“We actually have spent the majority of our relationship, like, all of our time, together.” 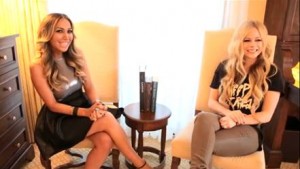 The topic next on everyone’s mind is babies! There is much anticipation that the hot couple will soon become parents however, it looks like that may be a ways off. Avril is focused on putting the finishing touches to her upcoming album.

Avril says: “You know what, I want to be ready. Focusing on my music, just releasing a new record this is my priority and my baby right now.”

Pop-rock songstress Avril Lavigne is set to release her first eponymously-titled album, Avril Lavigne, on Monday 4th November. Co-produced by Lavigne, Chad Kroeger, Martin Johnson and David Hodges, Avril Lavigne came together in the spring of 2012 and was recorded over the past year at Henson Studios.


By The Lowdown with Diana Madison