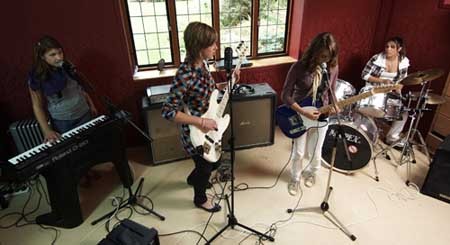 Start Your Own Boy Or Girl Band â€“ With Pop Creations From JML Direct TV And Brit Hit Music
For the hordes of young hopefuls who want to be a pop star, thereâ€™s an easier answer than signing up for â€˜The X Factorâ€™ (and you can avoid Simon Cowell too!). JML Direct TV and Brit Hit Music are bringing a musical masterpiece to the masses with the October 07 launch of two entertainment products, â€˜Start Your Own Boy Bandâ€™ and â€˜Start Your Own Girl Bandâ€™. And, for those with stars in their eyes, the purchase includes an offer for the best band to win its very own record deal.

Coming as a four disc box set from â€˜Pop Creationsâ€™, and costing just Â£19.99, â€˜Start Your Own Boy Bandâ€™ and â€˜Start Your Own Girl Bandâ€™ will be sold exclusively on JML Direct TV from mid October. Each set is crammed with 32 new and exclusive tracks from acclaimed songwriters and producers who have worked with famous artists including Backstreet Boys, NSYNC, Kylie Minogue, Eminem, Atomic Kitten, Louise Redknapp and Pop Idol projects in Germany, South Africa, Austria, Canada, Finland and other countries. Each song is accompanied by a backing track, over which budding stars and starlets can sing to showcase their vocal talents.

The young boy and girl band wannabees can then submit their tracks to the music moguls at Brit Hit Music. This is a rare opportunity, as many record labels wonâ€™t listen to tracks sent in by unknown artists. From the music submitted, three bands will be shortlisted and invited to record demo tracks at the magnificent Brit Hit Music recording studios.

And the ride doesnâ€™t stop there! The winner of the contest â€“ judged to be the best of the three bands – will have 1,000 CD singles of their track pressed. The winning track will also be released via 200 download stores, including iTunes and Virgin, as well as being mixed by top dance producers and promoted through the club scene. Depending on the success of the track, there could be an option on a second single and an album. And thenâ€¦ who knows? Wembley Stadium? A world tour?

Ken Daly, managing director at JML Direct TV says: â€œThe sky really is the limit! Normally it costs thousand of pounds to use a recording studio and itâ€™s completely unheard of to have access to new tracks. Now, however, for just Â£19.99, anyone can buy into the chance of stardom!â€

He adds: â€œPurchasing the Pop Creations â€˜Start Your Own Boy Bandâ€™ or â€˜Start Your Own Girl Bandâ€™, exclusively from JML, could be the first step towards getting your voice heard in the notoriously noisy music industry. Every track submitted is guaranteed to be listened to by the gurus at Brit Hit Music and, if youâ€™re not considered to have the voice of an angel, thereâ€™s no risk of being subjected to sarcastic public comments!â€

The big time opportunity presented by Pop Creations is supported by music moguls such as Bucks Music (responsible for James Blunt) and Mission Control (responsible for So Solid Crew and Blazinâ€™ Squad).

Steven Foster of Brit Hit Music says: â€œThis is a superb chance for anyone to get their friends together and live the dream of forming a band. Even if you donâ€™t win, youâ€™ll have great fun creating a new look, choosing a band name and rehearsing your top tunes. Donâ€™t forget Facebook and MySpace for inspiration from existing artists world-wide. With this product, youâ€™re working with some of the worldâ€™s best songwriters and producers so be sure to get those vocal chords going and give it your best shot!â€