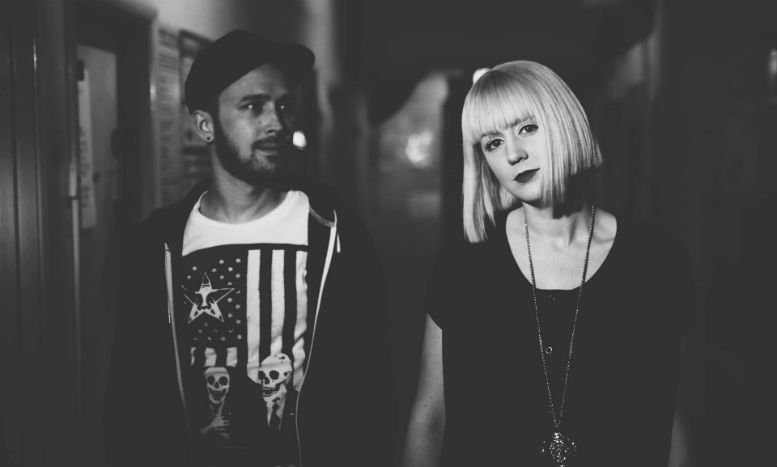 They talk about the smart & beautiful new single called ‘Resonate’, Dolce and Gabbana, Milan and singing Abba A Cappella….

First up, can you talk about your new single ‘Resonate’?

Resonate is a song about the moment of connecting with someone for the first time, all the drama and all the intrigue.

Can you tell us 5 things we should know about Avec Sans?

1) We’re Alice Fox and Jack St James.
2) We make intelligent electronic pop music.
3) Alice has given herself whiplash on stage.
4) Every Avec Sans show concludes with a line of guys waiting to ask how the tech stuff works.
5) A recent live show concluded with the audience baying for Alice to sing Abba A Cappella. She obliged.

How did you react when you got the news about being named ‘Band of the Year’ by Dolce and Gabbana?

Bemusement primarily. We got an email from one of Alice’s old band mates, now in the incredible band Haerts, who came a couple of places down the list and we had a joke about that. It was amazing because after that the fashion world really took us to their hearts, we were asked to design a shoe before we’d ever played a live show and we’ve spent time in Milan playing for luxury brands.

Jun 03, Hoxton Square Bar and Kitchen w/ Bright Light Bright Light. You should be there as Bright Light x2 has been touring the world with Elton fricking John and that’s a pretty big deal. So come and see us and then stick around and see what he’s all about.

Jun 18 Koppaberg Urban Forrest w/ Avec Sans, DJ Yoda, London. This show is in a FORREST in Hackney. If that’s not enough, Koppaberg are in charge of the whole thing, so I can’t promise, but I’m guessing that the free booze will be flowing.

Jul 30 Kendal Calling 2015 Cumbria, UK. This was tweeted at us. We’re playing with Snoop Dog.

We have a plan to say Dave Sitek (TV on the Radio/ Maximum Balloon) in every interview so that he might get sick of seeing the references pop up and work with us. We could just ask, but we’re wooing him in the form of interview name-dropping. He’s a sexy man.

We just got back from meetings in NY, Canadian Music Week and the Abba incident on Brighton Pier. We’ve just signed with a booking agent in North America, so we’re hoping to spend some more time over there this summer and we hopefully have some very exciting news about upcoming releases in the near future.