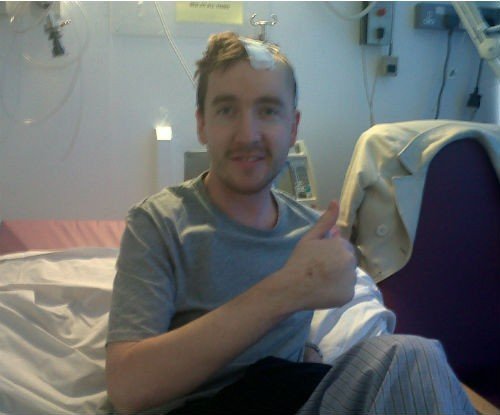 Patrick about to leave the hospital after his surgery

WHEN Ballymena man Patrick Finlay began writing his first novel little did he know that in a matter of years life would imitate art. It was always his dream to be an author and finally in 2008 he took the leap and began the first chapter. Patrick’s book To Seek Redemption is a story where Cancer is a running theme throughout. 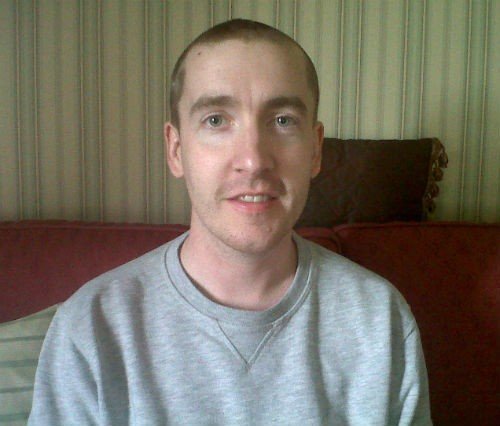 Patrick after spending a week at home after the surgery

But during the five year period in which Patrick, 32, was writing the book in his spare time he was diagnosed with a form of Cancer himself.

He explained: “I came up with the story for the book many years ago. The story follows the journeys of two central characters (father and adult son). But due to unforeseen and unfortunate circumstances they are forced to leave England and move to the deep south of America. The book is set against the backdrop of racism in the 1960’s.

“The two characters are both bound throughout the book by a promise they made to their wife and mother who was dying of cancer. As I was writing the story I was having many unexplained symptoms and had spent a lot of time off work sick.” 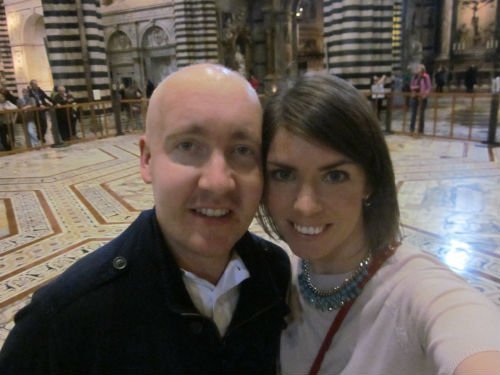 Patrick and his wife Ashley pictured after his radiotherapy treatment

“I kept suffering bouts of dizziness and occasional loss of memory. I also had severe headaches and was vomiting from time to time then in April last year I was finally diagnosed with a brain tumour.”

Patrick’s lifelong dream to be an author was put on hold and he was forced to take a significant amount of time off work.

“I was shocked, obviously, but also glad in a way that they had finally figured out what the problem was. I remember I was taking a lot of time off work and feeling really ill.

“Apparently my tumour is called an oligodendroglial tumour, I have a mixture of grade two and three” said Patrick, adding: “Within two days of being scanned I was diagnosed with a tumour and I spent the next two weeks in hospital so they could stabilise my head pain. 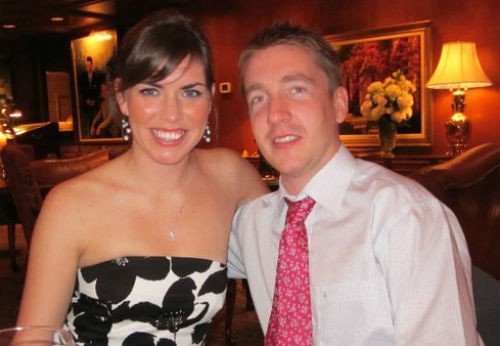 Patrick and wife Ashley before the treatment

“I was then allowed to spend the week before the surgery at home. During the weeks prior to surgery I was prescribed a heavy dose of steroids to help with the pain and reduce swelling.”

Undergoing a gruelling five hours of surgery on May 13 doctors attempted to remove as much of Patrick’s tumour as possible.
During the course of the operation they brought him round to speak to him to attempt to save as much of his communications skills as possible.
However, Patrick’s speech was severely affected and he began a whole new struggle. He literally had to learn how to speak again.

“When I was revived following surgery my speech was badly affected. I was unable to communicate the most basic commands or even to verbalise how I was feeling” said Patrick.

“I began speech therapy almost immediately but had to start with the simplest vocabulary and communication techniques. With lots of hard work and intensive speech therapy over the following months this improved significantly.

“I used the book as a way to keep my mind active and even used my speech therapy to contribute to the final editing of the book.”
Patrick confessed he looks back now and believes he couldn’t have recovered as well as he did without the support of his wife Ashley and close family. 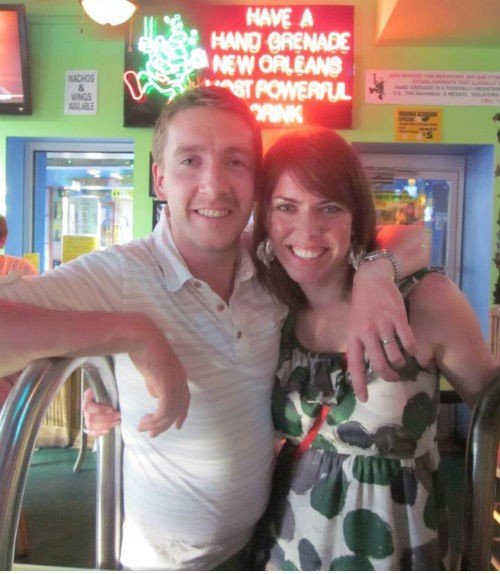 Patrick and wife Ashley before the treatment

He said: “I think the biggest challenge was overcoming the aphasia [speech difficulties], this took a long period of time.

“Further challenges arose too, for instance I can no longer drive for at least a year so I’m reliant on my family and friends to take me anywhere outside the boundaries of where I can get to myself on public transport.

“I also lost all my hair but I’m not particularly vain so that wasn’t really an issue (although I was getting called Mr T when it started to grow back in a mohawk).

“I had a fantastic family and friends support network. I couldn’t have done it without my mum, dad, my brother Simon and his wife Claire and my sisters Rachael, Emma Jane and Amy. 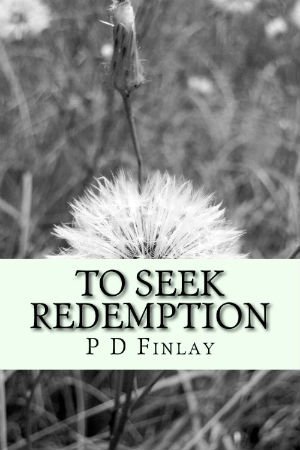 “I was very lucky to have such a support network including my aunts, uncles and wider family and friends. I cannot thank them all enough for everything they did.

“In particular my wife Ashley I simply would not be here without her love and support, any time I even thought about feeling down I could turn to her for inspiration, and our relationship is all the stronger having been put through this challenge.”

And through the bad times Patrick was able to celebrate a new addition to his family. He became Uncle Patrick after his brother Simon and his wife had their first child Harry during his treatment.

Between June and August last year Patrick went through a period of radiotherapy and while all his latest scans are looking positive he said he will be on alert his whole life.

He added: “I will never be fully recovered – my last scan results in November last year were very positive, the tumour had decreased in size and pressure had been released too.

“I had another scan in February, I’m waiting on the results and provided they are positive I will be constantly monitored and scanned every six months.”

Now back at work in a settling in period Patrick is looking positively to the future with a whole new lease of life as a published author.

He said: “I thought this is a clear example of art imitating life as. I was already researching and writing about America before I met my wife, who is American and of course the cancer was a key part of the story in my book which I had already written about before my personal diagnosis.”

And his advice to others going through the same thing? “I think your attitude towards a tumour or any kind of illness for that matter is really important” said Patrick, adding: “If you can try and remain positive throughout the process I think you’ll be much better placed to overcome the illness.

“Obviously I had great support from my wife, parents, friends and wider family circle which has really helped me.”

To Seek Redemption is out now available to buy on Kindle and through Amazon.co.uk.