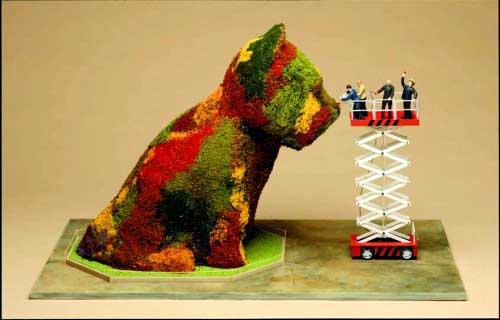 By Andrea Clarke
An Australian artist has turned mega stars U2 into 13 centimetre figures for his new exhibition based on the titles of the Irish bandâ€™s songs.
Alasdair Macintyre, who is based in Brisbane, saw the rockers in concert last year and was inspired to create his latest diorama, aptly named Elevation.
“It was sublimeâ€, he said of the gig.
â€œOccasionally in life I had what I call God moments. The previous time I felt it was at the Bill Viola [The Passions] exhibition at the National Gallery â€¦Of course, it’s a different sort of God moment when you’ve got 40,000 people around youâ€.
Each piece in the exhibition is named after a U2 song, including Staring at the Sun, (Stay), Faraway So Close and The Pursuit of Happiness.
The U2 diorama shows the band on a stage, Bono wearing his trademark cow boy hat and The Edge complete with his beanie watering the nose of American artist Jeff Koonsâ€™ famous floral puppy.
â€œI like doing pieces with pop culture figures in themâ€, said Macintyre. â€œI wanted to do something with Bonoâ€.
He chose Koonsâ€™ Puppy for the piece because he wanted to merge the icons of the art and pop world together.
He said: â€œKoons was talking about how Puppy communicates love, in that smooth way he talks.
â€œAnd in the doco he climbed a ladder inside Puppy and said, ‘Now I’m ascending into the sacred heart of Jesus’ â€¦ I take his patter with a grain of salt. But I love his work.
“I like playing with the whole art world situation, where we have these prominent figuresâ€.
Alasdair Macintyre’s Elevation is at Sullivan+Strumpf, Gurner Street, Paddington,Sydney from August 28.
Â©INK WELL PEOPLE