Brooklyn trio Au Revoir Simone talk to FAME ahead of the releasing of the remix album entitled â€˜Night Lightâ€™, out on July 5th through Moshi Moshi Records. 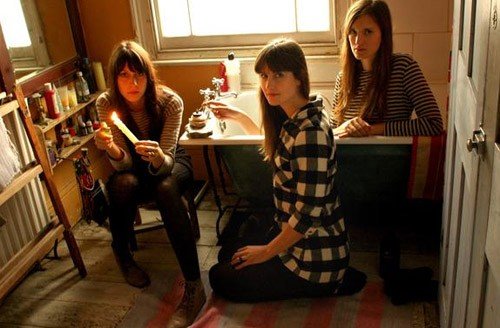 WHO ARE THE BAND MEMBERS AND WHAT DO EACH OF YOU DO IN THE BAND?
Heather: Keyboard, Drum Machines, Vocals

WHAT KIND OF MUSIC DO YOU MAKE / PLAY ?
Heather: lo-fi electro dream pop

WHERE ARE YOU FROM ?
Heather: New York City

HOW DID YOU GUYS GET TOGETHER AND WHEN?
Heather: Erika and Annie formed an after-work keyboard club to finesse their keyboard skills and cover songs from the 80’s. I joined, we started writing our own songs, named ourselves, started playing live and recorded an EP, and the rest is history.

WHO ARE YOUR INFLUENCES IN THE MUSIC INDUSTRY?
Heather: We have many! To name just a few: Electrelane, Air, Stereolab, Bjork, E.L.O…

WHAT HAS BEEN THE HARDEST PART OF BEING IN THE BAND FOR YOU?
Heather: Being away from home so much.

TELL US A BIT ABOUT YOUR EARLY DAYS AND HOW THEY DIFFER FROM NOW ?
Heather: In the interest of saving money, we used to refuse to get hotel rooms when we were on tour, which made for a many uncomfortable/creative sleeping situations involving staying with random fans, all sharing one bed, or just barely sleeping at all. It’s not a time I think I’ll ever look back on fondly.

WHAT WAS THE LAST GIG YOU PLAYED, WHAT DID YOU THINK OF IT ?
Heather: The last gig we played was at Warsaw, in Brooklyn, on June 24th.

It’s always nice to play at home–our friends were there in the audience to cheer us on, and we had good friends opening for us as well (The Hundred in the Hand, and Alexa Wilding). 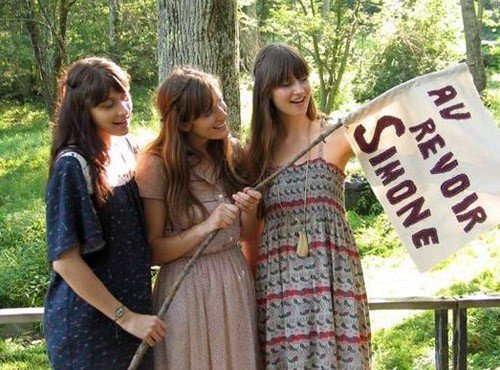 HAVE YOU ANY FORTHCOMING GIGS IN IRELAND OR NORTHERN IRELAND? IF SO ARE YOU LOOKING FOR WARD TO THEM AND WHY ?
Heather: No! I wish!! I loooooove Ireland. My mother’s side is originally from Ireland, so I still have a lot of family there, and when I play a show, they come out to support.

Ireland is a really magical country, I wish I could spend more time there.

WHATâ€™S THE MOST SUCCESSFUL THING YOU GUYS HAVE DONE TO DATE?
Heather: Perhaps the show we just played with Air in Paris…that felt like a real accomplishment.

We learned their songs, they learned ours, and we played them all together at Le Cite de Musique. It was one of the most surreal and memorable nights of my life, and definitely my favorite show of all time.

WHO HAS HELPED YOU THE MOST GET TO WHERE YOU ARE TODAY?
Heather: Being resourceful and determined.

WHATâ€™S COMING NEXT FOR THE BAND?
Heather: Since we’ve been on the road for “Still Night, Still Light” for so long now, it’s finally time for us to retreat back into our cocoons, write in our diaries, muse about the past and future, and wait for the melodies to come.

IS IT HARD BEING A NEW BAND IN TODAYâ€™S INDUSTRY?
Heather: Probably not nearly as hard as it was in the past.

A lot of people complain about the music industry these days, especially considering that most people will just download all your music for free, but I think the internet can be credited with how a small Brooklyn band could end up getting signed to Japanese and British music labels and consequently tour the world. I think it’s great!

HOW IMPORTANT IS THE INTERNET AND SOCIAL NETWORK SITES TO THE SUCCESS OF YOUR BAND ?
Heather: Very! It’s everything. Initially, we spent a lot of time doing all the leg work in NYC ourselves, dropping off packages of home silk-screened CDs to record stores to sell on consignment, putting up our posters and flyers, calling radio stations, etc.

But the internet and Myspace did the majority of our promotional work.

QUICK-FIRE QUESTIONS:
WHOâ€™S THE MESSIEST IN THE BAND?
Heather: Ha, Annie! But sometimes Erika. Definitely not me. I’m an insane clean freak, and it drives them just as crazy as their messiness bothers me.

But we all try to be as patient and forgiving with each other as possible on tour.

WHO IS HARDEST TO LIVE WITH ON TOUR?
Heather: We probably take turns on this one! We each have our own idiosyncratic behaviors that can be either difficult or charming depending on the mood of the day.

WHO IS THE JOKER AND WHY?
Heather: Probably Annie. When I try and picture what’s going on inside of her brain, I imagine technicolor cartoons with old-timey piano music playing in the background .

WHO MOANS THE MOST?
Heather: Definitely me! I’m such a complainer, it’s horrible. That might also make me the hardest to live with on tour. I’m trying though.

WHO IS THE MOST ROCK â€˜Nâ€™ ROLL & WHY?
Heather: Definitely not me. It’s a toss up between Annie and Erika.

I mean, Annie has this kind of punk-rock residue from her teenage years that still rears it’s head when she’s thrashing on stage to keyboard pop which makes me wonder if we’re playing the same song, but Erika seems to never tire.

She’s the first to want to go to an after party, meet fans, and is smiling all the while. I’m usually back stage complaining that my feet hurt.

WHO IS THE LOUDEST?
Heather: Definitely Annie. She has a raucous laugh and when she get’s excited about something she talks a million miles a minute and squeals. It’s super cute.

WHO IS THE MOST ANNOYING?
Heather: Maybe me? That depends. I’d like to think we take turns on this one, but it’s probably me.

WHATâ€™S THE MOST EMBARRASSING THING SOMEONE IN THE BAND HAS DONE?
Heather: We all have done horrifying things on tour which should never be named or spoken of again.

WHO WOULD YOU MOST LIKE TO COLLABORATE WITH IN THE INDUSTRY?
Heather: I wish I could work with Jim O’Rourke. I once had a dream that he had agreed to produce our album, but we were informed by ‘his people’ that he wanted to record the album in a clandestine suburban motel room in the middle of night.

As we pulled up to the motel parking lot in our white mini van (also fictitious), we were met by a bouncer wearing a black suit and sunglasses, who then led us up to the room.

Jim was there, but he was in the bathroom and wouldn’t come out–he insisted on producing us without ever being seen like the Wizard of Oz. I’ve never met the guy, but I feel somehow that this dream isn’t too far off in what working with him might actually be like.

WHO WOULD YOU MOST LIKE TO COLLABORATE WITH IN IRELAND OR NORTHERN IRELAND AND WHY?
Heather: I think Enya could teach us a thing or too. I was a big fan of hers when I was a kid.
www.myspace.com/aurevoirsimone
www.aurevoirsimone.com