ATTACK! ATTACK! release their self-titled debut album on Monday 3rd November 2008 through Rock Ridge Music / ADA Global. This is preceded by the ‘This Is A Test’ single on Monday 29th September 2008. Formed at the beginning of last year in a rundown industrial estate on the outskirts of Cardiff, Attack! Attack! have already begun to make quite the impact on an unsuspecting UK scene.Having cut their teeth in various South Wales based bands, including Dopamine, Adequate Seven, Midasuno and Pete’s Sake, the quartet that makes up the A!A! are no strangers to hard work, having released a plethora of CD’s between them and toured a handful of countries in the process. 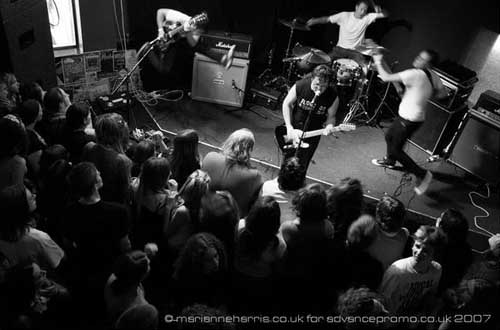 Taking their influences from 90’s grunge, punk, pop-rock and new-wave, A!A! power a sound that guitarist, Ryan Day, describes as “no frills or bullshit,” and “just honest, melodic and rocking.” Fitting then, that the band chose friends and fellow Welshman, Stuart Richardson, of Lostprophets to produce the record in Los Angeles. “Working with Stu was really cool as he had so many different ideas and views on things,” says Ryan. “We knew he was really trying to get the best out of us and we really respected that fact as it was pushing us to get better results. It was one of the coolest times I’ve ever had. He’s just a top guy and he really knows how to make things sound great!”

He’s not wrong, as you’ll find ‘Attack! Attack!’ littered with the type of hooks that’ll have even the most hardened of critics tapping their foot and humming along. From the rock ‘n’ roll burst of ‘This Is A Test’, to ‘Honesty’ a track that single-handedly begs for a festival appearance, to the quite frankly huge ‘Lights Out’, this self-titled debut album is one of the most impressive debut UK melodic releases in a long time. The reason is simple – it’s unforced melody for the love of songs, rather than to tick boxes and fit in.

With tours alongside Lostprophets, Aiden and You Me At Six already under their belts, as well as their first headline stint (which is selling-out fast) and a forthcoming trek with Funeral For A Friend, not to mention an appearance at this years Reading and Leeds festivals, it’s going to be impossible to ignore Attack! Attack!