Everyone knows I hate 3-pieces so when I realised Ashanti were a 3-piece I have to admit I was a little disappointed. 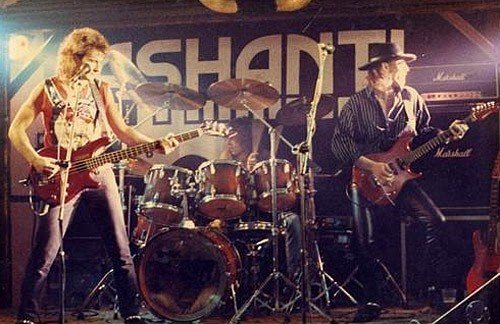 However, I have been proven wrong before by A Little Bitter and I’m prepared to be proven wrong again as Stevie Boyd launches into quite an awesome wee solo in about the third song.

One thing I have to say is that SO:NI know how to put a line up together and Ashanti are an excellent end to Ajenda and Last Known Addiction.

I really want to hate these guys, probably because of the hype – again if you know me you will know I can’t stand false hype.

But do you know what the hype is right !! Their stage show livens up as the lights go dark and a screaming crowd backing track gee up the crowd and the band simultaneously…great idea..

I know I moan about too many solos in a performance and although I hear loads I’m not irritated, I’m excited to see and hear what’s coming next……crashing drums……..heavy baseline…….deep, dark vocals and as the lights remain down the only way I can experience the band is by the senses of feel and hear until bam the lights go on, and and guy comes running off stage – waoh, I thought it was deliberate, seems its a great disguise for technical problems that I didn’t even notice.

Anyway, who cares deliberate or not this is awesome.

Experience is everything in this industry and these guys brought a pile of it out tonight and I bet they have more hidden at home for other projects.

So to the sound, there’s some great classic rock sounds, fab use of microphone effects, a deep sense that when the songs were written the first time around they were written with the naivety and passion of youth which doesn’t seem to have left this band.

These guys have become a cult figure on the local scene and I reckon they are gonna be around for a while, the number of other bands here supporting them is encouraging and amazing and I hope that as our rock scene grow the younger generation realise that supporting your friends and fellow musicians is one of the most important things you will ever do.

Not only will you learn a great deal but with such a healthy, vibrant support network maybe (with people like SO:NI on their side) we can rid our local scene of scenster nonsense that has about as much appeal as watching a Lady Gaga tribute in a crappy bar down the local.

All hail Ashanti !! Fathers of our rock scene, defenders of rock n roll – the way it was meant to be played.

And one final note I’ve decided to stop judging 3-piece bands before I hear them!

And just when I thought I had finished the review Stevie Prosser appears at the back on keys….I didn’t even notice the keyboards.

“anyway this song’s about dictators” shouts Kinky as I realise why I love these guys – embarrassingly its because they have a little reminder of the Manic Street Preachers, not in sound but lyrically for me……Hmmmmm am I really that drunk that I am making this connection !?

Flip sake I’ve just had to come back to my review because the boys are playing a song that sounds like the room is stuck in a thunderstorm, the sound is fabulous – love it !!
By Tina Calder