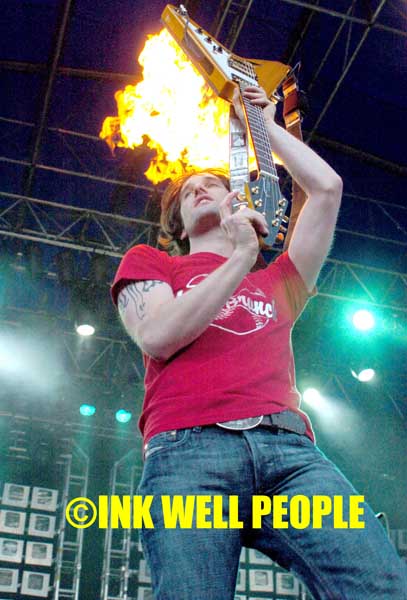 By Ryan Kennedy
Photo by Fabrizio Belluschi
Irish band Ash have hit out at Razorlight following their recent performance at the Reading festival.
The two bands played simultaneously on separate stages at the renowned music festival, with Razorlight heading up the main stage to an alleged mixed reaction from the crowd, but Ash frontman Tim Wheeler was confident their performance did not lessen the Downpatrick bandâ€™s audience.
He said: â€œWe couldn’t have played against a better band because I think they are terrible and so do many people.â€
Razorlight drummer Andy Burrows was quick to dismiss rumours of tension between the two bands, but admitted he wasnâ€™t their biggest fan, claiming going head to head with any act is a good thing for a group.
He said: â€œI don’t know [Tim] so I don’t know if what he said was out of character or not. I’m a big fan of Ash and I think a bit of healthy competition is good.”
Razorlight recently warmed up for their Reading appearance at Belfastâ€™s Tennentâ€™s Vital in Ormeau Park, and rounded off a summer of festival dates, closing the second night of the Leeds festival on August 25.
Â©INK WELL PEOPLE