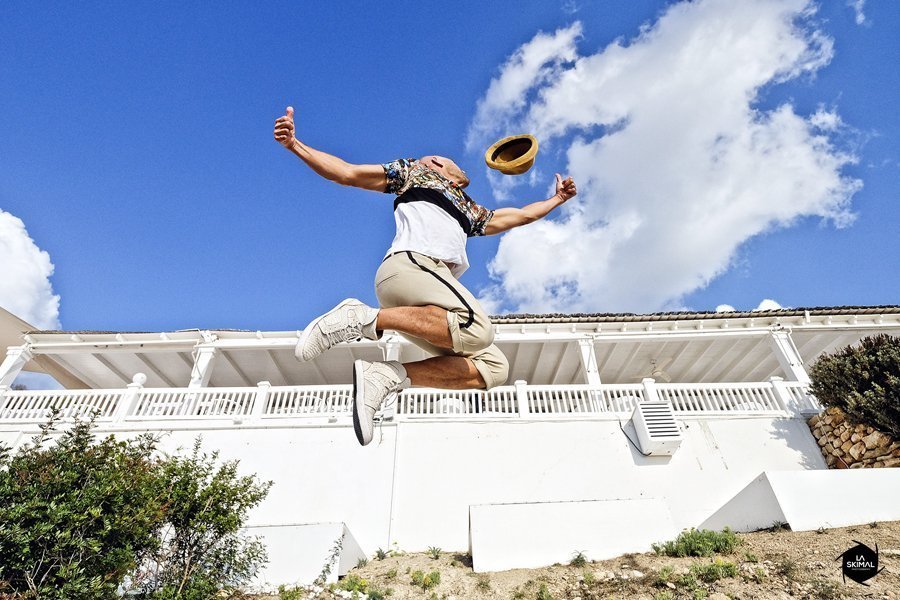 The US born songwriter and producer Peyton has been on the dance music scene for some time, and pours his individuality as an artist into every record he releases. Most recently he dropped the music video for his 2019 hit Things Can Only Get Better, summing up a weird and testing year and putting out a message of unity and hope. We spoke to him to find out more.

This video project definitely helped to give me a sense of purpose when I desperately needed one.

My very first attempt at writing a song was in 2003, while I was on a flight from London to Boston.  By the time we landed, I had written three verses, the bridge and the chorus for A Higher Place – a song I later recorded and released on Hed Kandi Records. It shot to number one in dance charts all over the world and launched what has now been an eighteen-year career in music.  The honest truth is that I really had absolutely no idea what I was doing and zero previous experience writing songs so, the only explanation I can come up with is that it was either a huge dose of seriously lucky beginner’s luck, or divine intervention if you believe in that sort of thing.  Sometimes I wonder if God was just so bored of watching me be a grumpy waiter that he/she/they decided to step in and throw me a bone!

I suppose something must inspire me on a ‘daily’ basis or else I wouldn’t bother to get out of bed, but unfortunately whatever ‘that’ is – it doesn’t always inspire me to write music.  When I do write music however, the inspiration is nearly always from personal experience.  It also comes from some deep down strongly held conviction that writing and creating music is what I’m actually ‘supposed’ to be doing, which is quite useful on those days when it’s the last thing in the world I actually FEEL like doing.

I was born in North Carolina, raised in Virginia, and went to college in Tennessee, so the first half of my life was spent in the south of the US.  My dad is a Pentecostal preacher, and gospel music was just about all I really knew or listened to growing up.  Even though I made my peace and parted ways with religion a very long time ago, there’s no denying that the essence of gospel music has always been and will probably always be at the very core of how I approach the creative process.  It wasn’t exactly easy for me to shake off the ideological shackles of religion, but it’d be near impossible to ever try making music with any other notion than the one I had drilled into me long before I ever imagined I’d be doing it professionally someday.  Regardless of what you end up believing or not believing about all the church stuff, if your roots are genuinely steeped in gospel, you can never see yourself as anything more than a vessel with a borrowed gift who’s on a mission for something or someone more important than you.  Whether you have a clue what that mission is supposed to be is another story.

Where do you find creative inspiration from?

Love, mostly.  Not just romantic love of course, but my love for life, my friends, my freedom, and my on-off love affair with this big, messed-up beautiful world all around me.  I’m inspired by the belief that we are all responsible for each other.  Putting more music into the world is just my way of trying to play some kind of useful role in this global, and profoundly dysfunctional family we’re all a part of.

The video for “Things Can Only Get Better” has really struck a chord. Can you tell us a little bit about the making of it?

The objective was to create a visual that everyone, regardless of politics, race or gender could identify with which might help position the song as a post-Covid anthem of hope.  The motive and the resources to support this mission came from a passionate businessman and music-lover in Los Angeles, who has been a long-time friend and fan of my work and who invests a great deal of his own time and resources into charitable works and foundations that he himself has set up.  With his support we were able to get British director Dan French on board, whose concept it was to have people coming out of cardboard boxes and finding each other again amidst the background of a stunning countryside landscape.   The video was shot on location outside London and in London’s famously gritty East End and took about three months to make.

What message did you want to convey with it?

We wanted to paint an uplifting and optimistic vision of unity, diversity and positivity that could potentially speak to and encourage just about anyone who had experienced some form of lockdown.  We had already started the process when the news of George Floyd’s death diverted the world’s attention away from Covid and reminded us all of that other deadly virus which has been stealing lives and causing devastation for much longer.  Production on the video was stalled as we took some time out to reassess the ultimate goal of our mission, but in the end, it was agreed that the vision we’d started painting was also a vision of post-racism, post-homophobia, and post-xenophobia.  Rather than trying to tackle any of these deeply layered issues head-on in a four-minute music video, we let the connection between the widely diverse cast of characters, as well as the song speak for itself. Love was always going to be the message, which might seem terribly simple and trite and yet, love is always the most profound response you can offer to any challenge or question humanity faces.

It’s been a strange year, but what have been your 2020 highlights?

This video project definitely helped to give me a sense of purpose when I desperately needed one.  Apart from that I’d say the connections I made with certain people, as well as nature itself, are the highlights I will take away from this year.  Like so many others, I struggled with depression and anxiety at various stages, but through my relationships with a few key individuals, as well as the relationship that slowly developed between myself and the natural environment around me here in Spain where I live, I found the strength to claw my way out of that suffocating cardboard box time and time again.

Can we expect new music from you soon?

As long as I’ve got breath to breathe, you can always expect new music from me soon.

Lastly, what do you most want to achieve as an artist?

That is a great question, the answer to which has undoubtedly changed and evolved dramatically since my career began, along with my perception of what it means to be successful. There was a time when I measured success monetarily, as so many of us do, especially in the music business.  One day a few years ago when I was home visiting my folks, my father said something to me which struck a nerve and made me think about this. He lovingly reassured me that he and my mom prayed every single day for my success to come. What struck me was not the fact that he was praying for me, but rather that he was asking God for something that he imagined was still to come, rather than giving thanks for something that had already arrived.  As an independent artiste whose work has primarily been in a music genre which is not mainstream, my career hasn’t exactly been a Ferris wheel of Grammy awards and big fat royalty cheques.  However, what it has been is a continuous roller coaster ride of experiences, allowing me to see a great deal of the world, and use my music and my voice to make an impact on people for nearly two decades now.  I suppose it goes back to what I was saying about the gospel singer’s approach to the creative process.  What I most want to achieve as an artiste is what I’ve slowly but steadily been achieving all along, and that is to continue being able to make music which serves a meaningful purpose, delivers an impact, and hopefully makes some kind of difference in someone’s life.  Whether that’s five, or five million, or five billion lives stopped being of importance to me a long time ago.  I will always just be a vessel, with a borrowed gift, on a mission for someone or something bigger than me.  The achievement is in being able to continue with the mission, and for that I give thanks every day, as do both my parents now on my behalf!