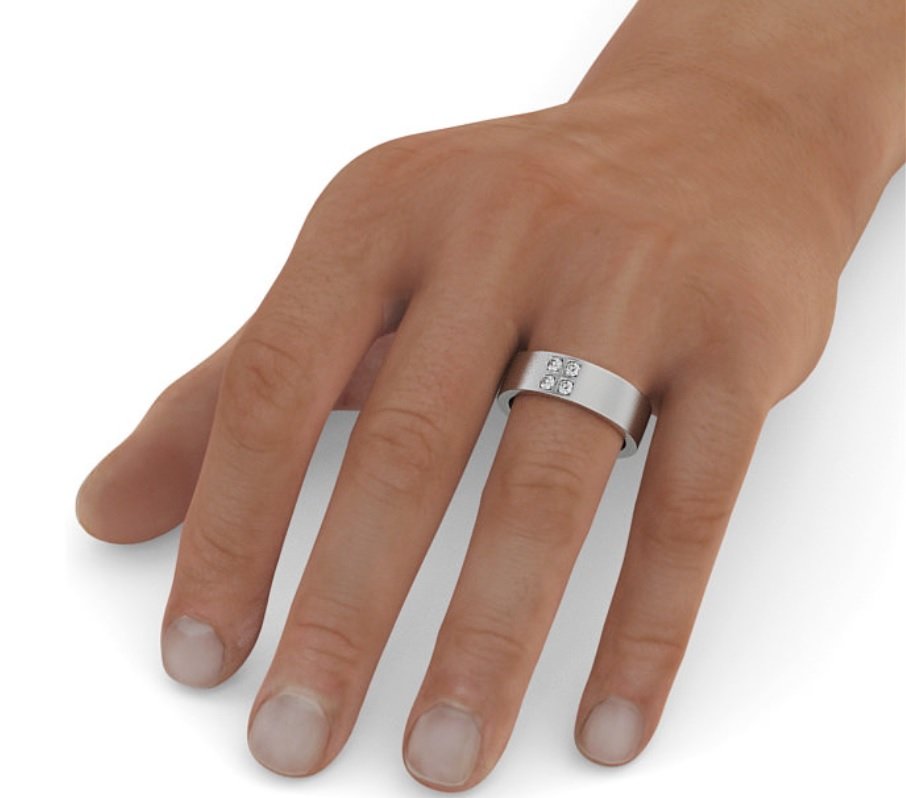 American jewellery companies ran a collaborative marketing campaign in 1926, the aim: to make men’s engagement rings popular. This campaign saw companies band together to create a series of ads in several major American newspapers. Featuring black and white images of a man smoking a cigarette (complete with a diamond ring on the third finger), these ads aimed to associate men’s engagement rings with more masculine traits. The rings were named to reflect this, with lines such as ‘The Pilot’, ‘The Stag’ and ‘The Master’.

The association of men’s jewellery with feminine traits was too deeply rooted in people’s thoughts however and the campaign was a failure. Times have changed in 2018 however, with men’s engagement rings, nicknamed ‘mangagement rings’ by the media, becoming more and more popular. But what was responsible for this shift in public opinion and is this trend going to stick around? We investigate the facts and figures with the help of Angelic Diamonds, Diamond engagement rings retailer.

A trend on the rise:

Mangagement rings were first brought to our attention in 2011, when a number of male celebrities were spotted on the internet supporting the trend with a ring of their own. Google data indicates that male engagement rings have been rising in popularity since then. The search volume for ‘male engagement rings’ reached a total of 54,00 searches in late 2014 – a figure which had more than doubled by late 2017, to 12,100. On leap year 2016, when it is traditional for women to propose to their partners, the figure reached an all-time-high of 22,000 searches.

The recent boom in the popularity of men’s engagement rings has also been influenced by same-sex marriage. The UK legalised same-sex marriage in July 2013, with the first gay wedding being held the following year. Following this, jewellers all around the UK responded by releasing their own range of male engagement rings, a move which appealed equally to women wanting to pop the question themselves.

Engagement ring trends have changed a great deal over the years, in fact, men in the 1940s and 50s didn’t wear a wedding ring. It’s thought that men in this era first started wearing rings as they went off to war, so that they would have a reminder of their wives and children at home. Wearing a ring is a personal choice however, for example, Prince Phillip is never seen wearing his wedding ring and neither is Prince William.

Men and their response to the trend:

Men traditionally wear wedding rings, however, engagement rings are far less common. For men wanting to show off their engaged status, the trend has been a welcome one. Michael Bublé was spotted wearing an engagement ring in 2010, after stating that in Argentina, where his fiancé is from, it is traditional for both partners to wear a ring. Johnny Depp also chose to wear a ring after proposing to Amber Heard, explaining that he had made the decision after the original ring that he bought her had been too large.

Fashion trends have always been heavily influenced by celebrities. When Prince William proposed to Kate Middleton with a blue sapphire diamond ring, the industry flourished. Replicas of the ring were created by jewellers all over the world in response to the huge demand, leading to an 800 percent rise in sales of imitation rings. It is possible that the increase in male celebrities wearing engagement rings could result in a similar outcome.

It is evident, however, that there are still some men who do not feel entirely comfortable wearing an engagement ring. Alongside the ring trend, there has been an emerging shift towards men’s engagement watches. Vintage watch retailer H.Q Milton recently revealed that they have seen a significant uptake in the sales of engagement watches in recent months. On a similar note, the co-founder of luxury watch retailer Christopher Ward said that customers were now buying watches with engraved personal messages for their partners.

It would seem as though more women than ever before are wanting to spend money on their partners, rather than following the one-sided traditions of the past.

Women and their response to the trend:

Many feminists have come out in praise of the mangagement ring. Some claim that when a woman wears an engagement ring, it signals her taken status to the wold, whereas men are free to go without a ring, as though they are still single. Others have claimed that a women’s engagement ring acts like a ‘brand’, signifying her ownership.

For most however, an engagement ring is simply a way of showing their appreciation for their other half by spending money on something special for them to enjoy – just like their own ring. According to data however, just five percent of men currently wear an engagement ring, so the numbers are still largely unbalanced according to gender.

So, what does the future hold for male engagement rings? It would appear that modern jewellery-wearing habits have already changed a lot. Only time will tell if the trend for ‘mengagement rings’ is here to stay. Perhaps engagement watches will catch on and become more popular. Either way, it’s great to see couples showing their love for each other with a symbol of their affections.