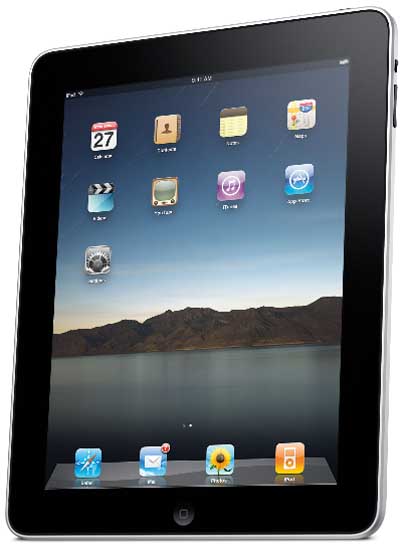 iPad’s responsive high-resolution Multi-Touchâ„¢ display lets users physically interact with applications and content. iPad is just 0.5 inches thick and weighs just 1.5 poundsâ€” thinner and lighter than any laptop or netbook. iPad includes 12 new innovative apps designed especially for the iPad, and will run almost all of the over 140,000 apps in the App Store. iPad will be available in late March starting at the breakthrough price of just $499. 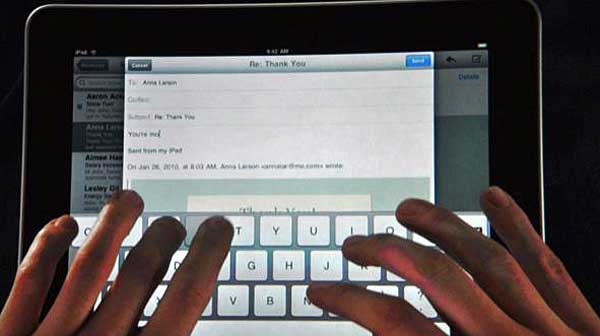 “iPad is our most advanced technology in a magical and revolutionary device at an unbelievable price,” said Steve Jobs, Apple’s CEO. “iPad creates and defines an entirely new category of devices that will connect users with their apps and content in a much more intimate, intuitive and fun way than ever before.” 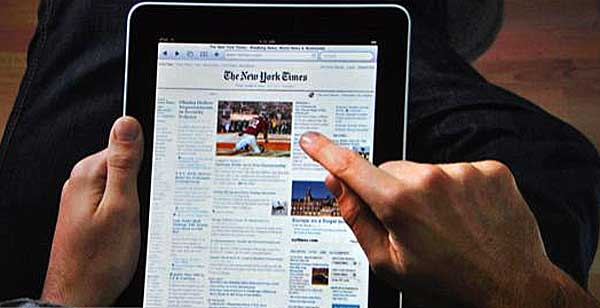 iPad features 12 next-generation Multi-Touch applications. Every app works in both portrait and landscape, automatically animating between views as the user rotates iPad in any direction. The precise Multi-Touch interface makes surfing the web on iPad an entirely new experience, dramatically more interactive and intimate than on a computer. Reading and sending email is fun and easy on iPad’s large screen and almost full-size “soft” keyboard. Import photos from a MacÂ®, PC or digital camera, see them organized as albums, and enjoy and share them using iPad’s elegant slideshows. Watch movies, TV shows and YouTube, all in HD or flip through pages of an e-book you downloaded from Apple’s new iBookstore while listening to your music collection.

iPad runs almost all of the over 140,000 apps on the App Store, including apps already purchased for your iPhoneÂ® or iPod touchÂ®. The iTunesÂ® Store gives you access to the world’s most popular online music, TV and movie store with a catalog of over 11 million songs, over 50,000 TV episodes and over 8,000 films including over 2,000 in stunning high definition video. Apple also announced the new iBooks app for iPad, which includes Apple’s new iBookstore, the best way to browse, buy and read books on a mobile device. The iBookstore will feature books from major and independent publishers.

Apple also introduced a new version of iWorkÂ® for iPad, the first desktop-class productivity suite designed specifically for Multi-Touch. With PagesÂ®, KeynoteÂ® and NumbersÂ® you can create beautifully formatted documents, stunning presentations with animations and transitions, and spreadsheets with charts, functions and formulas. The three apps will be available separately through the App Store for $9.99 each.

iPad syncs with iTunes just like the iPhone and iPod touch, using the standard Apple 30-pin to USB cable, so you can sync all of your contacts, photos, music, movies, TV shows, applications and more from your Mac or PC. All the apps and content you download on iPad from the App Store, iTunes Store and iBookstore will be automatically synced to your iTunes library the next time you connect with your computer.

iPad is powered by A4, Apple’s next-generation system-on-a-chip. Designed by Apple, the new A4 chip provides exceptional processor and graphics performance along with long battery life of up to 10 hours.* Apple’s advanced chemistry and Adaptive Charging technology deliver up to 1,000 charge cycles without a significant decrease in battery capacity over a typical five year lifespan.**

iPad comes in two versionsâ€”one with Wi-Fi and the other with both Wi-Fi and 3G. iPad includes the latest 802.11n Wi-Fi, and the 3G versions support speeds up to 7.2 Mbps on HSDPA networks. Apple and AT&T announced breakthrough 3G pre-paid data plans for iPad with easy, on-device activation and management.

Continuing Apple’s dedication to designing and creating environmentally responsible products, each iPad enclosure is made of highly recyclable aluminum and comes standard with energy-efficient LED-backlit displays that are mercury-free and made with arsenic-free glass. iPad contains no brominated flame retardants and is completely PVC-free.

*Apple tested wireless battery life by browsing web pages and receiving email over an AirPortÂ® network, never letting the system go to sleep during the test, and keeping the display at half brightness. This is a typical scenario of use on the go, resulting in a battery performance number that is very relevant to mobile users.

**A properly maintained iPad battery is designed to retain 80 percent or more of its original capacity during a lifespan of up to 1,000 recharge cycles. Battery life and charge cycles vary by use and settings.

Apple ignited the personal computer revolution in the 1970s with the Apple II and reinvented the personal computer in the 1980s with the Macintosh. Today, Apple continues to lead the industry in innovation with its award-winning computers, OS X operating system and iLife and professional applications. Apple is also spearheading the digital media revolution with its iPod portable music and video players and iTunes online store, and has entered the mobile phone market with its revolutionary iPhone.