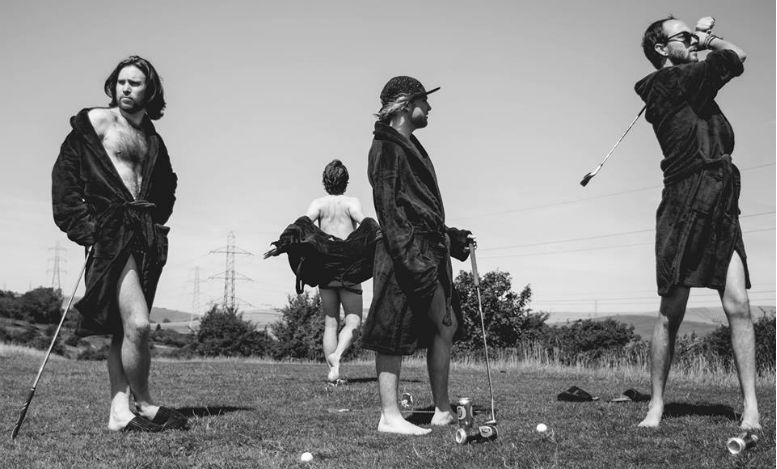 We caught up with Brighton-based Australian fiery garage-rockers Animal House, just before their release of the ‘Sorry’ EP (out on 18th November), a debut collection of party starters.

Hi Animal House! How are you today?

Great thanks. We’re in a small town in the south of Spain currently touring our EP. Last night we played in Benidorm which seems to be a giant retirement village by the sea that was built in the 70’s and hasn’t been updated. Kind of like Australia’s Gold Coast. Beach was loovleh

What’s your debut EP ‘Sorry’ all about?

Just the everyday nothing. Sh*t that’s just not important in the grand scheme of things but seem so prevalent at the time. Pretty much taking the piss of ourselves and everyone else we can.

What on earth made you decide to move from Sunny Australia to dreary old England!?

Everyone asks us this. It’s a fair question. The truth is, we all burn too easily in Australia so we thought we’d get back to our Great British routes for a while. Oh, and also, the music scene is humungous and everything is close to mainland Europe, where we are currently touring, thanks to the move.

Any Brighton bands you’d recommend to you?

Heck yeah. Brighton is full of amazing bands. Blue Spectre play Tarantino surf rock like no band you’ve ever seen. Strange Cages play hefty lo-fi psych rock, Our Girl smashing it at the moment, The Magic Gang who just got signed play easy-breezy guitar pop. The talent Brighton has to offer is crazy.

Touring is havoc. We’re driving and managing the tour ourselves. 17 hours in one day from Brighton to Barcelona with shows back to back the following days in crazy weird/fun Spanish pubs and clubs. Everyone is so nice to us in Europe and it’s a great way to see the country-side. Honing our set and just getting used to being on the road are a huge part of it. Can be pretty testing but it’s a smashing experience.

What’s been your favourite gig to date?

Hard to say. Last year we played in Paris to a crowd of completely unknown people bar one, and everyone began picking up the words to the songs as we were singing them and shouting them back at us once the songs finished. Bonkers.