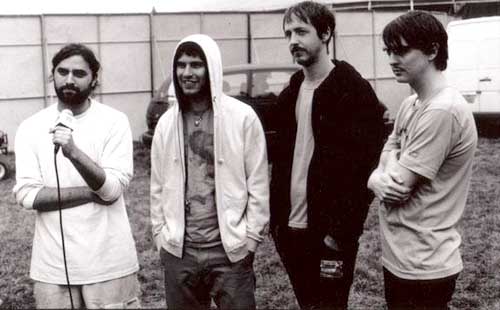 For the uninitiated, Animal Collective is a group of four best friends who grew up playing and recording music together in Baltimore County, Maryland.

Why Animal? Cause it’s the only word they could think of that made any remote connection to what they thought their sound was — and of course, they love their fellow animals very much. Why Collective? The band hasalways wanted to be the ones who define who and what AC is.

Two people? Four people? Why not?Don’t be surprised if you come to see the band and its not what you thought it would be (and try not to get too upset).

Over the last few years Animal Collective has seen its fan base swell due to the amazing live shows and hard touring. They get bigger and stronger with each passing album, exploring new musical visions with creative force. The band eschews genres and labels and prefers to be inspired environmentally â€“ an â€œanything can happenâ€ sort of vibe, which they capture with amazing
consistency.

AC continues onward after seven years and seven albums (six studio, one live) that combine a love of sonic freeform electronic-horror-gospel-hip-hop soul-pop-madness and brings it all together into something that is hopefully
totally pleasing and at other moments completely scary and confusing. Most importantly they hope itâ€™s refreshing in this crazy, crazy world.

STRAWBERRY JAM was released on Domino in Ireland on the 14th September to critical acclaim. After headlining The Coronet earlier this month, Animal Collective are pleased to announce a show at Dublinâ€™s Tripod on Sun 4th November.