ANGUS, Thongs and Perfect Snogging, the latest film from director Gurinder Chadha, is being released on DVD just in time for Christmas.

Based on the book by Louise Rennison, the teen film centres on eccentric but loveable 14 year-old Georgia Nicolson, played by Georgia Groome, as she overcomes the trials and tribulations of growing up.

Georgia has to endure the ‘traumas’ of nosey parents who don’t understand her, an annoying three-year old sister and the everyday ups and downs of being a teenage girl in a world that’s as mental as she is.

With awkward kissing lessons to move up the ‘snogging scale’, fake tan disasters and occasional stalking, Angus, Thongs and Perfect Snogging is full of laugh-out loud moments in Georgia’s wince-inducing quest to achieve the ‘perfect’ snog. 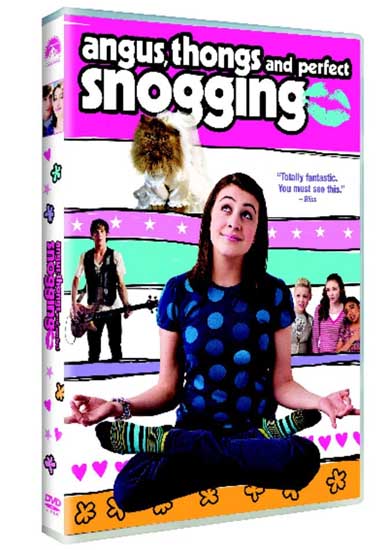 Featuring a stellar supporting cast including T4 favourite Steve Jones as the hunky handyman, and Alan Davies (Jonathan Creek) and Karen Taylor (Touch Me, I’m Karen Taylor) as the ‘ancient’ parents, the DVD release of the most teen-savvy British comedy this year is sure to be at the top of every teenager’s Christmas list this year.