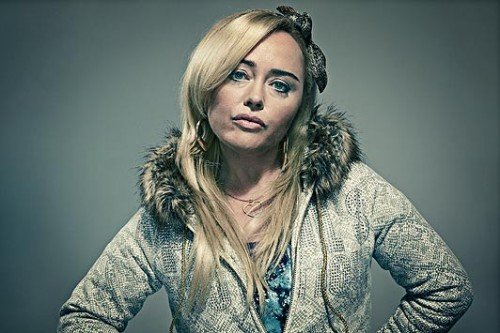 To use a whole menagerie of metaphors, Angeline Ball is like a dog with two tails; she’s the cat that got the cream; she’s happy as a pig… let’s just say she’s very happy.

The actress, who has starred in everything from The Commitments to EastEnders, has landed a plum role in a drama she adores – the brilliant Shameless, in which she plays Chatsworth’s resident hairdresser Gloria Meek.
Here, she explains just why she’s so happy, recalls a multi-award-winning night, and reveals what it’s like to appear on a postage stamp.

You’ll be hitting our screens as Gloria Meek in the new series of Shameless. What’s she like?
She’s quite a feisty woman, she’s strong and self-made. She’s got her own little business, running the hairdresser’s on the Chatsworth Estate.

She would be party to a lot of information, because of the classic thing of hairdressers being a bit like psychologists. She’s a good friend of Mimi’s and Karen’s, and of all the women, really. We don’t know much about her past, but that will probably come up soon – but she’s not a new resident, she’s always been there, you’re just getting to see her now.. She’s strong, independent, doesn’t suffer fools gladly.

She’s got a brother who she’s close to as well, doesn’t she?
Yeah, he comes in in about episode six. He’s an ex-priest. She’s always had to look after and take care of him. Any time he ge4ts into trouble he always lands up back on Gloria’s doorstep. They have a very loving, very caring relationship. They look out for each other, but they can drive each other mad at the same time.

With Gloria being a hairdresser, do you have to appear to be cutting hair in a lot of scenes? And if so, did you get taught?
Not at the moment – I’m just putting rollers in and finishing off a blow dry and stuff like that. I dread to think that I would be cutting anybody’s hair – they’d have to put a wig on or something – but I’m not averse to learning. I’d love to go, if the producers want to send me on a little hairdressing course.

Your character has a Manchester accent in this series…
Yeah, I’m playing a Manc! That was quite a challenge. It’s always terrifying coming into a new series, especially something as brilliant and as well-established as Shameless, but the accent was a big challenge. But I sort of prefer being Mancunian, because I can separate myself from Gloria. Visually she’s very unlike me, and I think it adds when I can put on this different accent. That’s what I’m in this business for – I love constantly changing my look, my accent, all that kind of thing.

What other kinds of accents have you had to do over the years? Do they come quite naturally to you?
I’ve had to do all sorts of regional Irish accents, I’ve done a northern accent before, I’ve done Scottish, American – I can’t do Welsh to save my life, I always end up in Bombay for some strange reason. For the Manchester accent, I did work with a voice coach for a couple of days, and they listened to it to make sure I was getting it right. I wouldn’t have wanted to do it if it wasn’t spot on.

Have you been a fan of the series in the past?
Absolutely. I think it’s fantastic. It’s wonderfully written, wonderfully acted, and I think the filming and the editing is just incredible. It’s very tight, it’s very energetic. I watched it from the get-go. I don’t really watch television that much, but if I’ve been home and it’s on, I will sit down and watch it. I think it’s unique, and it’s set a certain precedent for that type of drama.

How does it feel, turning up for your first day on a show that you’ve been such a fan of?
Very daunting – terrifying – I felt like a new girl at school. Everyone’s so well-established with their characters, and I was a bit scared of them and a bit overawed. But everybody made me feel so welcome – I have to say, hand on heart, this is a really, really wonderful cast and crew. There’s not a bad egg amongst them. There’s no egos, they’re secure in the knowledge that they’re doing a great job, and I think that shows on screen, to be honest with you. And the crew is brilliant as well, everyone’s such a good laugh on this job, we have such a good time. By day three, I felt part-and-parcel of the whole thing, I didn’t feel in any way about the new girl.

What are the best and worst things about being in Shameless?
The best thing about being in Shameless is that it’s a wonderful opportunity for me to work with so many great actors, and to work on such a long project. I’m learning so much, it’s a real learning curve for me. It’s a fantastic cast and crew, it’s a very happy job to be on. It’s very funny, we’re always laughing. It’s actually a dream job, to be quite honest with you. The worst thing – all I can say about it is I live in London and it’s in Manchester, and I have two children. But you work around that. That’s the only minus, a mother’s guilt, and I’d probably feel that guilt if I was only going to work round the corner from my house.

Over the years, you’ve won lots of awards and been in some hugely successful shows, yet to many you’ll always be known for The Commitments. Is that frustrating?
I’m happy with it now – 20 years later I’m absolutely at peace with it and I can embrace it again. At the beginning, when I was starting out after the film, I really didn’t want to be associated with that. It was silly, really, but youth is wasted on the youth. We just did a concert last March in the O2 in Dublin, to 14,000 people, and it’s quite interesting, because we were never actually a real band. We were only put together for the film. So we had 14,000 people actually coming to see a band that doesn’t exist. We did that for the 20th anniversary of the film, and it was quite a cathartic thing for a lot of us. It was such an amazing time – so much so that we’re actually doing the London O2 on ST Patrick’s Day next March. So yeah, I’m very happy with it. 20 years later, it feels to me like Gloria is a very similar character to Imedla. I’ve spent years cutting my hair really short and playing lesbians and gritty, hard roles, and now I’ve gone back to being a fluffy girly-girl.

Is it true that in 2003, at the Irish Film and Television Awards, you won best actress in both the film and TV category?
Yeah, that’s right.

That’s just greedy!
Honestly, it didn’t sink in. I’d just had my child then, my first baby, Katie, and I was breastfeeding, and all I was concerned about was whether I was going to fall out of my dress, because I was getting bigger as the evening went on! People said “Do you realise you’ve swept the board?” and two awards were sitting on the table, and I was like “I’m really happy, it’s great,” but it didn’t sink in. That was incredible – now I look at the two awards and can’t believe they were on the same night. I went home with one in each hand. I was very blessed. But they were great jobs to do, so well-written and great characters. The great thing is being in something and believing in it and enjoying yourself, as with Shameless, it really helps. If someone’s miserable on a job, it really can show.

Is it true that you’ve also been on a postage stamp in Ireland?
Yeah! I have it in a little frame. It’s us three girls [from The Commitments] singing with Andrew Strong. So I’ve made it to a postage stamp. You’ve just reminded me of that. They also did little Commitments brooches with us on them in France, so I have one of them. But like I say, youth is wasted on the youth. I didn’t keep any of those dresses, and I could have. I was so fed up wearing them, and I wanted to be in Doc Martens and prove that I was funky, that I was happy to get rid of those black dresses. I’m sure they’d be worth a fortune on eBay now!

The new series of Shameless starts on Monday 9th January at 10pm on Channel 4.