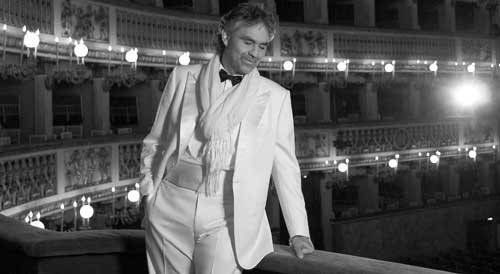 Andrea Bocelli has confirmed a concert date at The 02, Dublin on Thursday 05 March, 2009. Tickets for the concert will go on sale on Friday 19 December at 9.00am for this fully seated performance. Andrea’s international breakthrough hit was the beguiling Con Te PartirÃ² and in it’s duet arrangement with Sarah Brightman, Time to Say Goodbye (Con Te PartirÃ²). The solo version was a worldwide smash. 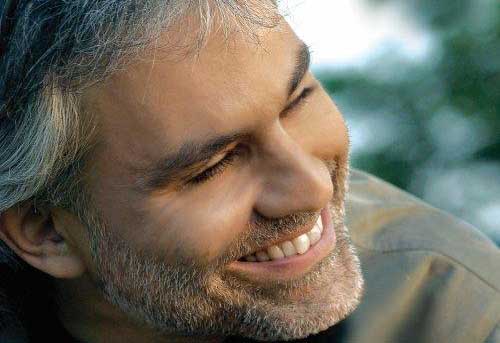 In 1996 and 1997 Andrea Bocelli exploded on album charts across the world, with the international debut album, Romanza. Conquering Europe, then charts around the world, the album amassed a multitude of platinum and multi-platinum awards, with worldwide sales in excess of 16 million copies to date.

Andrea’s 1999 Best New Artist Grammy nomination marked the first time a classical artist had been nominated in the category in 38 years. ‘The Prayer’, his duet with Celine Dion for the animated film, The Quest for Camelot, won the Golden Globe for Best Song and was nominated for an Academy Award. In March 1999 Andrea released his second pop offering, Sogno. The album, which included The Prayer, entered the upper reaches of the pop album charts around the world, confirming Andrea’s position at the pinnacle of the world of popular music, and giving birth to the phenomenon of Bocellimania.

In the fall of this watershed year in an already impressive career, Andrea released Sacred Arias, which went on to become his most successful classical album to date. It has also become the biggest selling album by a classical soloist of all time. With its release, Andrea captured a listing in the Guinness Book of World Records, as he simultaneously held the No 1, 2 and 3 positions on the US classical album chart. The next three-and-a-half years followed with Andrea holding permanent residency at the No 1 spot.

The romantic yet melancholic sound of 2002’s Sentimento combined the voice of Andrea Bocelli with the exquisite violin of Maestro Lorin Maazel. The album was another huge success on the international pop and classical charts and this was reflected by Andrea’s acquisition of two awards including Album of the Year at the prestigious British Classical Brit Awards in 2003. In support of this album Andrea embarked on a packed concert schedule that took in places as far ranging as China and Madison Square Gardens in New York. In addition to these ubiquitous landmarks Andrea also performed in front of the Egyptian Pyramids (a highlight that could only be equaled by his performance in front of The Statue of Liberty earlier in this prolific career).

The 2004 release of Andrea’s fourth pop album, was followed in 2006 by Amore, featuring guest appearances by the likes of Stevie Wonder and Christina Aguilera. Andrea Bocelli follows up his triple platinum success of Vivere with his new release Incanto, an album that evokes Italy in the 1950s.
andreabocelli.com
MCD/Mick Quinn/Ensign Records/OBAM Present
AN EVENING WITH
ANDREA BOCELLI
The O2, Dublin
Thursday 5th March 2009