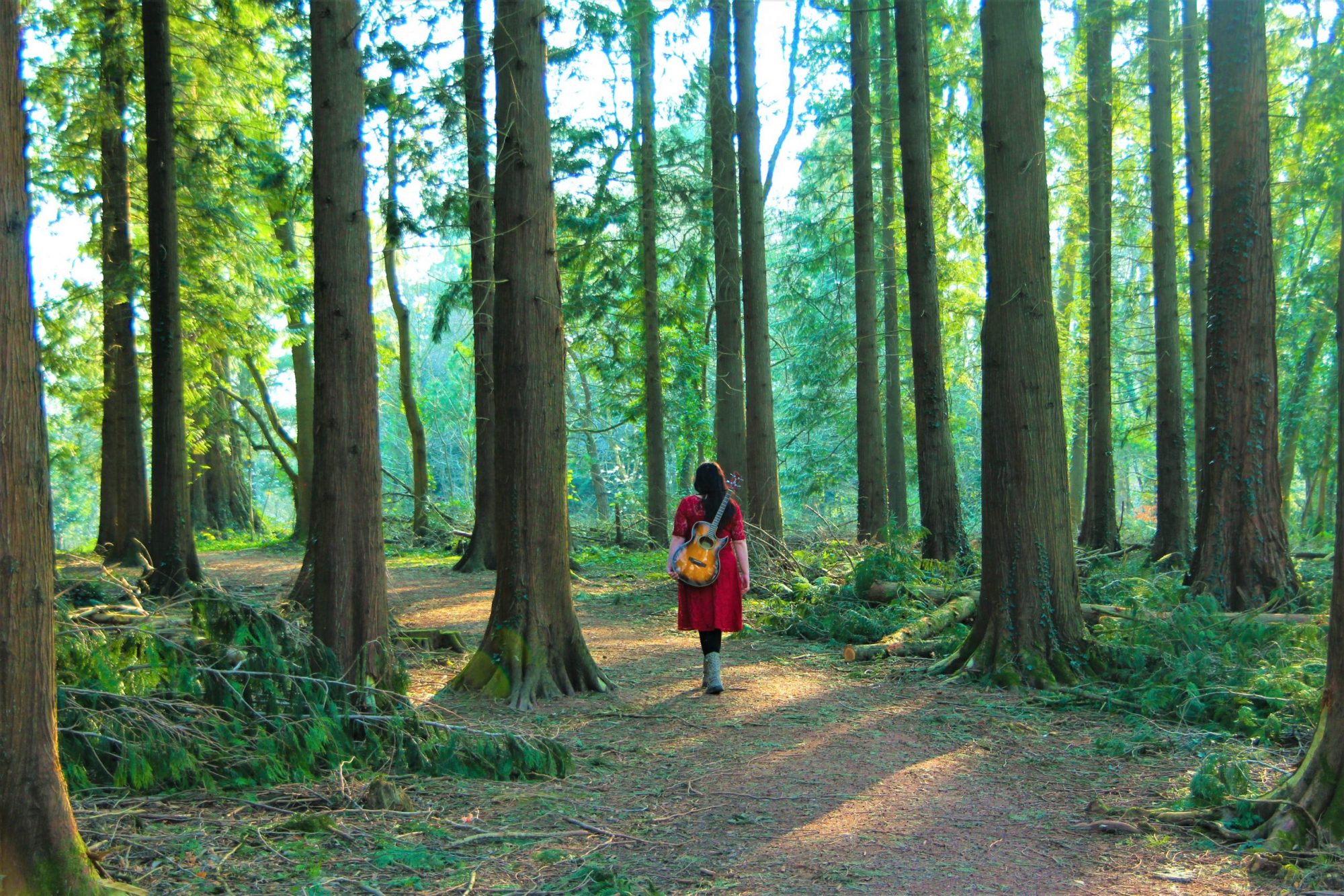 'There’s definitely something about the natural world that makes it perfect for the metaphor and symbolism that helps us understand our troubles as human beings.'

Like music, fairytales have been powerful media for storytelling throughout the ages. Blending the two can create a wonderful blend of human expression, helping us to make sense of the human condition and communicate messages and meaning. Likewise, music and nature have been intertwined for centuries, — symphonies inspired by the soothing sounds of a river, the chirping of birds, or the rustling of leaves…

Amy Hopwood is an artist whose music sits at this intersection, this week sharing the single Brambles off her evocative upcoming folk album Into the Woods, to be released on 5/8/22. In the album, Amy explores psychological themes present in old tales and represents them in a new context with lots of nature-inspired imagery. Accompanying herself on the tenor acoustic guitar, Amy sings her own songs as well as traditional folk.

A charming and relatable fairytale-inspired folk tune, Brambles‘ narrative takes its inspiration from the classic tale of Sleeping Beauty. Rather than falling into a deep slumber, the sensitive-souled protagonist Rosa builds psychological defences like thorns and brambles to protect herself from others. The tale’s “prince” manifests in the form of an understanding and kindhearted partner who works alongside her to help undo what she’s cultivated over the years. Despite this helping hand, the heroine didn’t exactly need rescuing, as she managed okay before his arrival, and also has her own role to play in stepping out of her loneliness.

“It seems to me that these relationship barriers are something so many of us experience at some point – either as the person who has let the thorns grow, or the person who comes along with the best intentions and finds the man or woman they are attracted to strangely shut down and unattainable. But the song reminds us that there is always a way through the brambles…“

Currently based in Devon, Amy has lived all over England, including many years in Dorset, Sussex, Yorkshire and Humberside. Her studies in social anthropology, knowledge of folklore and organizational culture have shaped her creative process and themes. These interests often bleed into her lyrics and she continues to build on them. Alongside her occupation in the field of health and social care policy, Amy leads The Songwriting Project, delivering community songwriting programmes aimed at reducing social isolation, building confidence and nature connection. Although a disability has made live performance difficult in recent years, her songs have been played a number of times on BBC Radio 6 Music; playlisted on Le Village Pop; and they make regular appearances on a raft of national and international folk shows.

Make sure to check out the stop-motion animated music video for Brambles below, along with our QuickFire Questions interview with Amy.

The fairy tale I loved most as a child was “The Princess and the Pea”. It’s a weird story really, where a girl wakes up sore and bruised because she could feel a pea under the 20 feather mattresses she slept on. In the story, this sensitivity is what proved her royal blood and that she was a princess. As a sensitive child myself, I guess I was hoping it was proof that all the anxiety and heartache meant I was destined for better things! However, after the last year of writing, producing and promoting an album, alongside my two day jobs, I’m pretty sure I could fall asleep on a whole can of peas… So I’m definitely no princess!

I love all sorts of music and nearly always have the radio on in the background, usually BBC6 Music or a French station called Le Village Pop. However, I think the artists who have had the biggest influence on the way I write and sound would be Elliott Smith, Karine Polwart, Alela Diane, Malcolm Middleton and Emily Portman.

What do you hope people take away from listening to your music?

Well in the first instance, I just hope they enjoy it! But after that, I’m really happy when I hear that my music has helped people in some way. Sometimes that might be because they realise someone else thinks the same way, or understands what they are feeling, or sometimes it might just be that they find my music soothing and comforting. My most popular song on Spotify, “Connemara Cradle Song”, is a lullaby, and I can see from the playlists it has been added to that lots of people are using it to de-stress or help them get to sleep after a tough day – and I think that’s great!

What does connecting with nature mean for you as an artist, and outside of that?

Nature is definitely a big inspiration for me in my songwriting and the traditional folk songs I choose to sing. My last album “All at Sea” was totally focused on the sea in one form or other, but with my new album “Into the Woods”, I’ve gone from the blue of the sea, to the green of the forest. I’ve been fascinated by trees and everything that lives in or amongst them (whether in reality, or in our imaginations!). There’s definitely something about the natural world that makes it perfect for the metaphor and symbolism that helps us understand our troubles as human beings.

I don’t actually get away from my desk and out into nature nearly enough – but it always has a positive calming and de-stressing effect on me when I do! It has such proven health benefits that I actually help others to connect to nature through some of the projects I run as The Songwriting Project.

The Songwriting Project sounds like a wonderful initiative. Can you tell us more about it?

The Songwriting Project is all about using singing and songwriting to create community connections and improve wellbeing. It started during the pandemic when I got groups of people together online to write and record songs sharing our common experiences of lockdown. One of my current projects is called “Nature Songs” and uses singing and songwriting to help people connect to nature in a local city park. I love running these projects, and I’m sure they are just as therapeutic for me as for the people taking part!