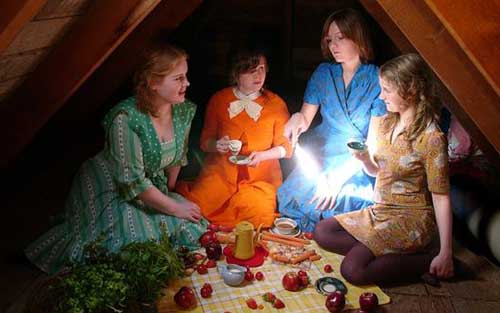 KURR is undeniably dreamlike. It succeeds in being both highly evolved and yet childishly simple, much like Raymond Scottâ€™s famous Music For Babies. There is something deeply nurturing about amiina, but there is also something enigmatic and mysterious. Much of this is undoubtedly due to the fact that alongside more traditional instrument like guitars, keyboards and mandolins KURR features a saw, Celtic harp, metalophones, singing wine glasses, xylophones, glockenspiels, harmonium, bells, table harps, kalimbas, cuadro, celest, harpsichords, Rhodes piano, synthesisers, trumpets, trombones, bass clarinet, drums, cello, violas and violins. Oh, and a computer.

They previously collaborated with and actted as Sigur RÃ›s’ touring foils, with whom they have also recorded for a number of years.

The unfamiliarity of their sound may be puzzling for a moment, but itâ€™s utterly distinctive, gently revealing vibrant colours, a playful imagination, and an unusual warmth and sensitivity. Precise it is â€“ so much so that some have mistaken it for electronic music â€“ but clinical it is not. One only needs to see the faces of the four musicians as they perform to realise that the joy it projects is completely human. Leaping from â€˜instrumentâ€™ to â€˜instrumentâ€™, from one side of the stage to the other, they smile frequently despite their immersion in songs whose otherworldly magic they themselves canâ€™t quite seem to believe they have unearthed.

Doors 8.00pm. Tickets are Â£9.50 (inc booking fee), and are available across the counter from Ticketmaster outlets,
online at ticketmaster.ie , and on their 24 hour booking line on 0870 243 4455. (sales may be subject to credit card charges and
the commissions of Ticketmaster agents). Tickets also available from Belfast Festival at Queens Box Office online at belfastfestival.com
or from Festival Box Office Mon – Fri (9am-5.30pm) 028 9097 1197 and in person at Queen’s Film Theatre, 20 University Square, Belfast