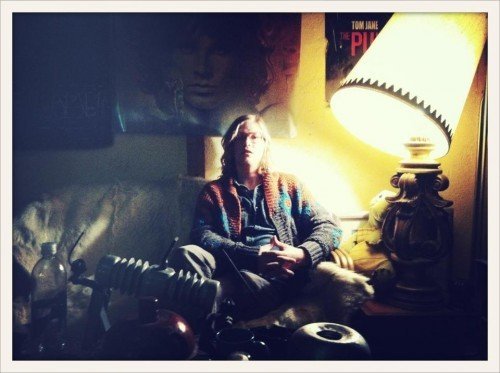 Amazing 25-year-old singer-songwriter Allen Stone, from the tiny backwoods town of Chewelah, Washington, just sees himself as “a hippie with soul.”

One look at his long, curly blond hair and thick-rimmed glasses brings home the first part of that equation – and perhaps leaves one unprepared for the raw, soulful power unleashed when Stone opens his mouth to sing.

Allen didn’t discover soul music until he was a teenager and started collecting classic albums from the 60’s and 70’s.

Allen says: “Soul music from that time wasn’t just about bumpin’ and grindin’ at the club – it was a huge part of a cultural movement. That’s where my inspiration comes from”.

Stone has spent the past four years honing his unique style the old-fashioned way: crisscrossing the country in a van with his ace band and playing any small club that would have him.

Since the digital release of his self-titled album via his own stickystones label in October 2011, Stone’s shows have been selling out from coast to coast. The album jumped into the Top 10 of Billboard’s Heatseekers chart and entered the Top 5 of iTunes’ R&B/Soul charts.

The new stunning self-titled, self-penned EP, is out now, offering up the perky bar-room funk of ‘Say So’, the velveteen party groove of ‘Celebrate Tonight’, the slow burn of ‘Satisfaction’ and a temperate acoustic delicacy ‘Unaware’: a solid gold introduction to this blue-eyed hepcat.