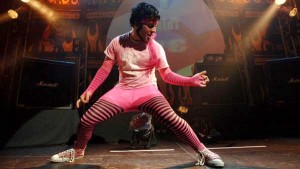 Air Guitar UK are once again pulling out all the stops to produce a jaw dropping spectacular and are calling guitar gods of all ages to surrender their souls.

The he winner of these prestigious finals will bag an exquisite trophy worth hundreds in addition to a golden prize ticket to represent the UK in the 14th Air Guitar World Championships in Finland on 19-21 August 2009.

The introduction of a runner up prize this year is testimony to the high standard of the competitors. With an exclusive tour of the Gibson Guitar Studios and a chance to strum guitars played by the stars, the stakes are once again sky high.

On the judging panel – twice Air Guitar UK Championship winner Gabi Matzeu AKA The Hoxton Creeper and twice WORLD CHAMPION, Zac Monro aka The Magnet, the finest UK exponent of Air Guitar to have graced the world stage and a passionate defender of the artform.

Contestants include Midnight Moses, who returns to defend his title, and last yearâ€™s runners up Bud Rock and Wildthing, who enjoy a dedicated following thanks to their onstage pursuits. Following a run of Scottish heats this week, the winner of Air Guitar Scotland will be transported to London to attempt a grasp on the trophy and represent the UK in Finland on a Scottish ticket. As well as regional contestants from Bristol to Manchester, Wales has also entered the fray this year, sending Glyn Wise, the runner up in Big Brother 7, as their answer to a nation’s dreams.