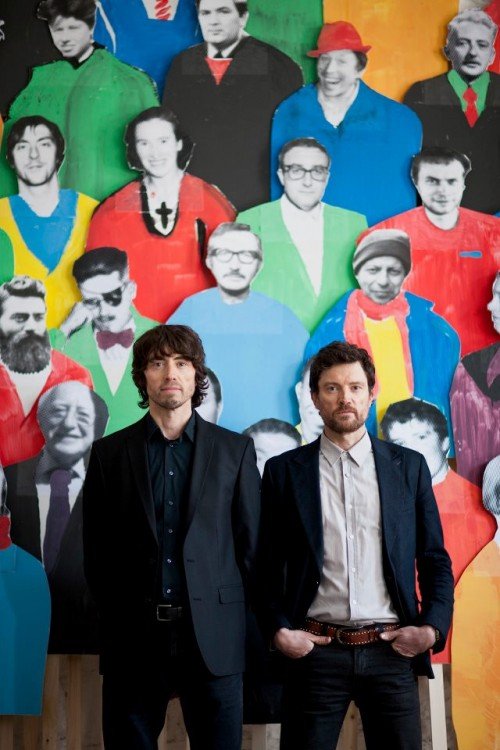 Forming in 1998 and consisting of brothers Steve and Joe Wall, Rory Doyle, John O’Donnell and Marc Aubele, the band created their own record label (since renamed ‘Dirtbird Records’) and wasted no time in releasing debut album ‘High-Lo’ in 2000, to rave reviews.

Their quirky brand of indie pop won them many fans, including no less than U2, who invited the band to support them during one of their sold-out shows at Slane Castle.

The band then released an EP in 2004 which surprised and divided their fans – exactly what they were hoping for evidently! Consisting of just one song, ‘The Drowning Pool’ is an unexpected kick-ass explosion of bluesy rock – very different from their previous material. (I highly recommend you check it out, it’s fantastic!).

Album number two was released in 2005, and proved highly successful. Particularly popular was lead single ‘Passing Through’, which was the most played song on Irish radio that summer.

The band continued to tour and grow, with an appearance at the SXSW Festival in 2006 and another personal invitation to support, this time Crowded House on their phenomenally successful reunion tour Down Under in 2007. Several European dates and a few more taster EP’s also followed.

All of which brings us neatly to third album, ‘Stop The Lights’. Released in March and funded by fans using ‘Fund It’, it is already climbing the charts nicely.

It consists of eleven songs, each with its own identity yet recognisable as ‘The Walls’, something that is quite unique in today’s often repetitive music world.

First song ‘Bird In a Cage’ has a wistful yet summery feel. It describes perfectly the difficulties of a ‘city kid’ moving to the country, with bittersweet lyrics and jangly guitars.

Song three, the namesake of the album, has a great staccato guitar riff and some tricky- sounding beats – which drummer Rory Doyle plays effortlessly. It also contains the unexpected addition of trumpets, which gives the song a jaunty, almost ska feel.

This contrasts with fourth song ‘The Great Escape’, which has minimal instrumentation apart from strings, lending a dreamy quality to the song, along with its yearning lyrics that somehow reminded me of Talking Heads ‘Road to Nowhere’.

Song five again changes things up, with an almost 80’s sounding synth and snare sound, as well as acoustic guitars. It’s a great, catchy number. Next up is ‘Dead Flowers’, which again has synth-y undertones but an altogether rockier sound. It’s a real toe-tapper, has a great guitar solo and some thoughtful lyrics about ‘stopping to smell the roses’; it’s definitely my favourite song.

Track seven, ‘All a Blur’, contains some quite unusual instruments – the twinning of a banjo and an acoustic guitar, and maraccas – but somehow it all works.

The lyrics tell of a whirlwind night with a girl singing at a karaoke bar. Song eight, ‘Carrying the Fire’, on the other hand, marries and indie folk rock beat and ‘woah woah’ singalong chorus with lyrics about…Oliver Cromwell! This album does indeed cover a wide range of topics!

Next up is ‘Doodlesque’: sounds silly, but isn’t – it’s all about never letting people “put you down”. Very inspiring lyrics wrapped up in jangly, almost ‘country’ guitars and echoing vocals which give the song quite a ‘Stone Roses’ feel.

The lyrics in song ten, ‘Thanks for the Photographs’,describe great holiday memories and a longing to go back to simpler (younger?) days. It’s a quiet, contemplative song – apart from the bold drumming during the chorus which really blows away the
cobwebs!

The final song is the sweet ‘May the Road Rise’, a modern spin on the traditional Irish greeting. Piano-led, with picked-out notes on an electric guitar, it is a beautiful ending to the album, particularly as it ends with a similar piano sound as the beginning of the album did.

It is clear that this band is a talented bunch; very accomplished songwriters and musicians.

What impressed me the most is how they managed to make each song sound individual and unique while still retaining that recognisable ‘The Walls’ sound.

They also clearly have a fabulous offbeatsense of humour, as can often be heard in their lyrics as well as their press (such as their Facebook page, which lists their ‘genres’ as ‘rock, alternative, pop, shlock, wok, sock’, and their influences as ‘a strong mug of tea’).

A band that is hardworking, talented, prolific and a little bit silly? Yes, please!
thewalls.ie
facebook.com/thewallsband
Review by Melanie Brehaut