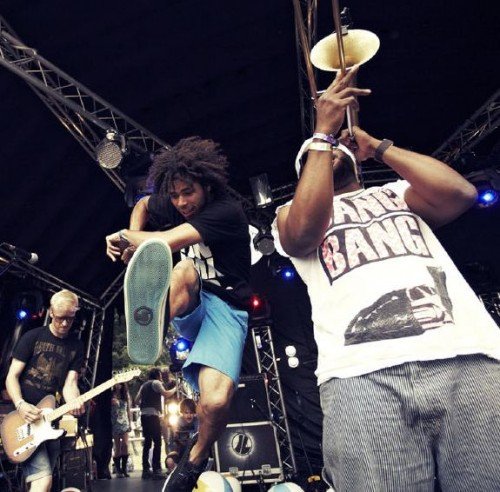 For British ska punk band Imperial Leisure, the times are definitely a-changing: their second album ‘Death to the One Trick Pony’ has just been released and it may be just the ticket to send them on their way to fame and fortune.

Forming in London in 2003, the band called upon their collective influences to create a fun, unique spin on the ska punk genre.

Combining a summery, British feel with often rapped vocals and the obligatory jaunty trumpets, the result is a Madness or Less Than Jake for the twenty-first century.

The band began creating a name for themselves with supporting slots for acts such as UB40 and The King Blues – but also, intriguingly, with impromptu ‘guerilla gigs’ in locations such as the Eiffel Tower, Camden Town and the Reading Festival car park!

Since then, they have become well-known for their ‘party atmosphere’ shows and a real sense of dedication to their fans.

These shows culminated in their first headlining gigs in October 2011, as well as invitations to festivals such as 2000 Trees and Bestival.

And so to album number two! ‘Death to the One Trick Pony’ has been released on their own ‘Steamroller’ record label, with funds raised by fans on Pledge. These fans were rewarded by being the first to hear the album – a nice touch.

If their first album was all about booze, mates and ‘The Landlord’s Daughter’ (an actual song title!), ‘…Pony’ is an altogether more sombre affair, with tales of false friends, confusion, loss and money woes.

The band have clearly matured in between albums. Fear not though! The toe-tapping sense of fun still resonates, most notably in first single ‘London to Brighton’, an homage to skating (released, in fact, to raise funds for the Brighton Hove Skatepark Association).
The most notable effect this has had is the juxtaposition of quite dark lyrics with an often perky, uplifting beat (then again, when does ska punk NOT make you want to nod your head in time to the music?).

The songs themselves are a great mix of ska (‘Number One’, ‘Dance Floor’), punk rock (‘Can’t Lie’, ‘Bitter and Twisted’) and often quite poppy, summery rock (‘Talk to Me’, ‘Thin Line’).

Particular favourites were the schlock-horror rock of ‘Dead Model’ and the duo of track 11 ‘Talk To Me’ and track 12 ‘Saturday Night’, which detail the sad end of a relationship; as well as instrumental final track, the memorial ballad ‘Song For Paul’, with its beautiful guitar and lush trumpets.

All in all, this is a thoroughly enjoyable album, well worth your hard-earned money. One minor complaint is that the lyrics, whilst quite clever and often painfully accurate, can be a bit repetitive; however this shouldn’t detract from the album as a whole.
imperial-leisure.co.uk
facebook.com/imperialleisure
By Melanie Brehaut