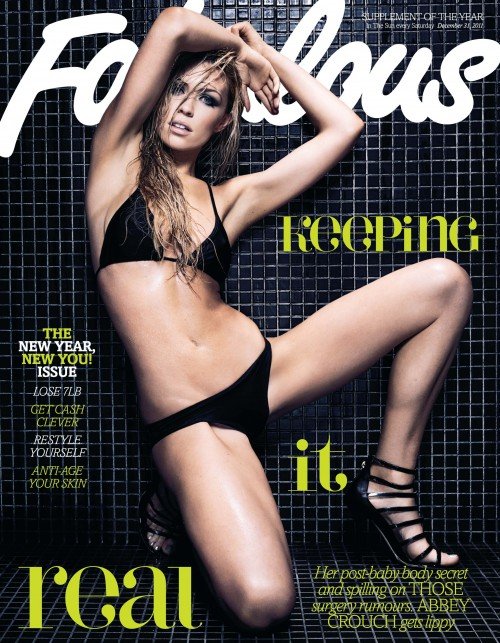 Abbey makes it pretty clear she has had zero surgery and is 100 percent natural. We’re a little jealous! Though she would ‘never say never’ to surgery.

Abbey denies having her lips done after the offending photo that sparked the speculation, “The funny thing is, I actually wanted my lips done and was genuinely thinking about it, but after that response? No way!”

Abbey is just the same as every other pregnant woman; she says “I put 2 stone on when I was pregnant, but I was all bump and a big fat face.” She explains, “I’m thinner now than I’ve ever been, I don’t diet and my weight sticks at 8 stone.”

Abbey and her husband Peter Crouch have been together for six years after meeting in a bar where the then 19-year-old Abbey was working and while Peter was playing for Liverpool.

After having their first child together, Abbey says “Sophia has bought us closer together – it’s just the most amazing bond, because the two of us have made a human being together.”

Abbey will always be the down to earth Liverpudlian she is now.

She reveals “Even after I started working and earning good money, I always loved a bargain from TK Maxx. I feel like the same person I was pre-fame, but with a bit more excitement in my life.”

So what does the future hold for the yummy mummy? “My ultimate goal is to be a Victoria’s Secret model, that’s my main aim before I get to 100.” Go for it girl, we say!

To read the full interview pick up your copy in this Saturday’s Sun. fabulousmag.co.uk