THE Academy Award-Winning film Once is to be made into a Broadway musical. The Irish indie movie was the unexpected winner of the Best Original Song at this year’s Oscars and has received critical acclaim around the world.The film, starring The Frames’ Glen Hansard and MarkÃ©ta IrglovÃ¡, is a modern day musical set on the streets of Dublin, where a street musician and a Czech immigrant meet and begin writing songs together and hope to land a music contract in London. 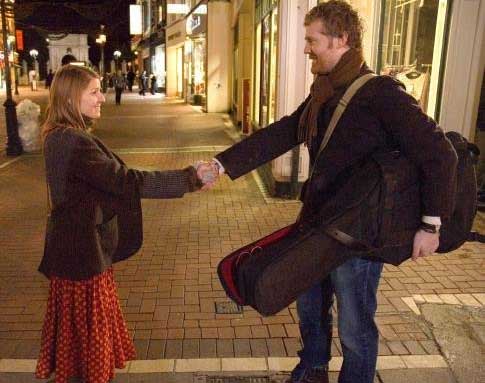 Through the music they write the duo work through their past loves, and are confronted with new feelings for each other.

Although the film was made in 17 days for about $150,000, the soundtrack has sold more than one million copies.

The film and theatrical producers who have acquired the theatrical rights for Once say they will open the show during the 2010-11 Broadway season.

Producer John Hart said: “In a landscape where the American musical must evolve, Once provides a wonderful, unique opportunity.

“Those of us who fell in love with it and it’s score at the movie theatre came out singing, and will do so again when it finds its way to the stage.”

A cast and creative team for the show have yet to be announced.