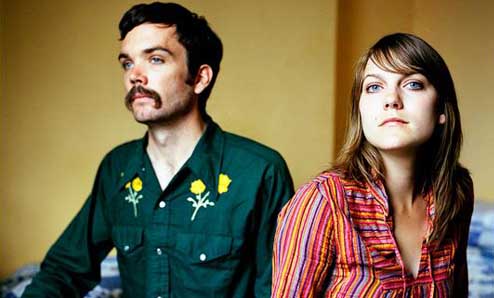 The Way The Wind Blows is the incandescent third album from A Hawk And A Hacksaw, and was partly recorded in a remote Romanian village with members of the justly admired Balkan folk group, Fanfare Ciocarlia. Now a duo comprising songwriter Jeremy Barnes (drums, accordion, vocals) and Heather Trost (violin), AHAAHâ€™s music is a joyous and romantic romp through traditional sounds, interspersing the duoâ€™s passionate musical duets with exuberant brass band stomp.

At age 18, Jeremy Barnes departed from his hometown of Albuquerque, New Mexico with a hopeful spirit of adventure, in hot pursuit of music. Travelling in France, living in New York and Chicago (where he played drums for the cult group Neutral Milk Hotel), Barnes finally settled in Leicester, England at the turn of the millennium. This resulted in Jeremy briefly drumming for Broadcast during their HaHa Sound period, while secretly tinkering away on what would blossom into A Hawk And A Hacksaw.

Arriving in 2002 with a self-titled debut recorded in France, accordion, piano and bursts of drunken chorus recalled Kurt Weill orchestrations and the whimsical side of Tom Waits, with a flourish of PT Barnum deceits and backwoods carnivals, top hats and curly moustaches. Essentially a one-man band, Barnes was toe-dipping in waters that would soon run much deeper.

Every Sunday Barnes would volunteer at the local refugee centre. â€œIn a run down cafeteria there were people from China, Iraq, Iran, Roma from Romania, the Czech Republic, Bulgaria. There were Africans, Pole and Kurds. I mostly played with Iraqis and Kurds; the Roma kept to themselves. I thought there was some sort of unapproachable barrier between me and these people whom I so admired. But there wasn’t.â€

The experience was a revelation. Throwing in his postmanâ€™s hat, Jeremy set off on a journey that would lead him all the way home to Albuquerque.

After a stint in Prague, where the celebrated follow-up Darkness at Noon (released in 2005) was composed in its entirety, Jeremy moved back to his hometown, after some 10 years absence. Almost immediately, he met his paramour, the violinist Heather Trost, whose immeasurable influence on A Hawk And A Hacksaw can be seen in the intense stage rapport the duo have live, and a visceral sense of joy that rarely leaves an audience unaffected.

â€œWhen I met Heather, I asked her about Bela Bartok. That was our first conversation,â€ says Jeremy. â€œShe played me Bartok’s â€˜Six Roumanian Dancesâ€™. We practiced and listened to music from places like Greece, Hungary, Turkey and especially Romania.â€

Partially recorded in the tiny Moldovan village of Zece Prajini, Romania, The Way The Wind Blows was begun in a place where there are no pavements or plumbing, and farmers drive horse-drawn carts instead of cars. But the town is suffused with a forgotten music, harboured here for decades. Out of every open window comes the sounds of brass instruments, playing a joyous mixture of Jewish and gypsy music that originally fused in the early 20th century at weddings and other celebrations.

â€œI was treated like family,â€ Jeremy recalls. â€œThe Roma were just as curious about me as I was about them. What we played together was not traditional Romanian music by any means â€“ you will have to look elsewhere for that â€“ but these amazing musicians certainly etched into the record their own sound, that I could not have found anywhere else.â€

Later in May â€˜06, Jeremy and Heather completed work on the album in Chicago, and at home in Albuquerque, with help from a 19-year-old local trumpet player called Zach Condon. â€œHe was the only other person in town that listened to the same music as we did.â€

Zachâ€™s outfit, Beirut, has recently released a debut album (Gulag Orkestar) in the US with accompaniment from Jeremy and Heather. Currently a cause celebre amongst the blog cognoscenti in the US and other discerning publications internationally (â€œwonky, dishevelled magnificenceâ€¦ Gulag Orkestar is steeped in the blackest of Balkan sorrow, but the experience of listening to itâ€¦ is almost unfeasibly upliftingâ€ OMM), Jeremy and Heather will perform as part of Beirut on tour this autumn, culminating in a series of UK dates supporting Calexico this November, at which AHAAH will also appear as a duo. They will return to Europe UK next spring to tour with some of their Balkan friendsâ€¦

The Way The Wind Blowsâ€¦ the sound of the Old World, made new again.
myspace.com/ahawkandahacksaw

A Hawk And A Hacksaw Live @ Crawdaddy Dec 11th. Tickets are â‚¬17.45 on sale now through Ticketmaster and other usual outlets nationwide. Booking Line: 0818 719300
www.aikenpromotions.com